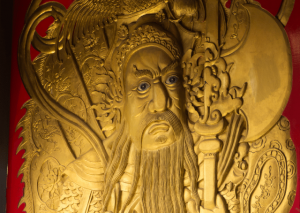 In Chinese mythology, King Yama is known as the king of hell. Also known as King Yan or Yan Luo Wang, King Yama is the ruler of the underworld and judges the dead. As the Chinese god of death, he is a feared god in multiple belief systems including Chinese and Japanese folk religion and mythology, Hinduism, Taoism, Buddhism, Sikhism, and Zoroastrianism.

Originally a Hindu god who first appeared in the Vedic Sanskrit hymns, stories of Yamaraja (King Yama) came to China as Buddhism spread throughout East Asia. The myths of King Yama began to intermingle with local regional beliefs, and soon, King Yama was revered as an important religious figure in every eastern culture.

King Yama is always depicted as a man and is usually painted or sculpted as having huge eyes that can see every right and every wrong of each soul brought before him. His face is usually contorted with a stern expression due to judging the many evils of mankind, and he has dark red skin. He is often pictured wearing traditional robes of China and the hat of a judge.

He is usually accompanied by a scribe who carries a book which contains the name and death date for every person that has or will ever exist. King Yama also employs the services of two fearsome guardians – Horseface and Oxhead, who bring every soul before him for judgment.

King Yama actually comes from the Sanskrit derivative of Yamaraja. The name Yan Wang literally means King Yan. Outside of China, he is simply referred to as Yama, or King Yama, and his name is also recorded as Yanlao Wang, Yen Lo Wang, or Yamla. Some scholars believe in the original Sanskrit that the word yama means to prop or truss up, as in to prop up sinners

Who is King Yama in Chinese mythology?

In Chinese mythology, King Yama is the lord of death and the judge of the dead. He is the king of the ten layers of Diyu (Chinese hell) and is responsible for keeping an account of the life and death of every human being. He is also responsible for determining the transmigration of the human soul. Everywhere King Yama wanders in hell, a scribe accompanies him carrying a large book, which lists the dates of every human’s life.

When a human died in the earthly realm, King Yama sent his guardians, Horseface and Oxhead, to bring the newly dead before him in hell for judgment. Humans who led good and worthy lives were rewarded with good future lives.

Some were even granted renewed lives and were restored to their bodies. Men and women who committed grievous crimes and sins, however, were sent to be tortured or doomed to be reincarnated with frightening consequences.

However, for the vast majority, the length of a soul’s stay in hell was determined by the severity of one’s transgressions.

As judge, Lord Yama would interrogate those that had committed evil acts and would ask them if they knew the spiritual consequences of their decisions. If they did not know, or worse, knew the spiritual consequences but committed atrocities anyway, then King Yama would order the sinners to wander through horrific mazes until arriving at their just punishment.

Liars and hypocrites would be steamed alive in large bronze cauldrons. Murderers who killed by the sword or knife were cursed to climb hills and mountains made of razors for all eternity. Arsonists were bound to pillars of heated metal to have their skin seared off layer by layer.

Other tortures were being sawed in half over and over; having one’s body ground in a mortar and pestle or a mill; having sharp barbed objects inserted into orifices or having hooks driven into the ankles, collar, shoulders and ribs and then being hung upside down; set adrift in an endless sea of blood to drown; thrown into a never-ending lake of fire; strapped down and forced to drink molten metal; and infinitely more.

The most despicable tortures, however, were kept at the lowest levels of the Diyu. King Yama reserved those levels for the ones who committed the Five Grave Offenses – patricide, matricide, murdering an enlightened one, shedding the blood of a Buddha (not necessarily killing, but even drawing blood), and causing a Buddhist community to fracture.

It is important to note that while King Yama is the Chinese god of death and he is greatly feared, King Yama is not considered an evil god. While he is often depicted as wrathful in Hindu belief, in ancient Chinese belief, the role of King Yama was necessary to maintain a balance between life and death, and good and evil. Yan Wang was responsible for administering justice to those who commit acts of righteousness and acts of darkness.

He was also responsible for creating a punishment in hell that would warn a soul to not commit the same sins after they were reincarnated in their next life. 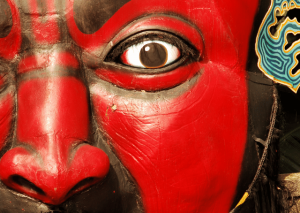 Even fierce King Yama, however, was subject to the punishments of hell. As a created being, he was still a soul that had to experience Diyu. Lord Yama’s punishment was that he had to be tied down to a scalding hot metal platform three times daily while molten metal was poured down his throat. This is used to explain why his skin is so red.

Ancient versions of King Yama’s myth feature him as an overseer of other kings of hell. Many Chinese traditions prior to the Tang Dynasty featured over 130 different hells (8 larger hells subdivided into 16 smaller ones). Each of the hells were ruled over by lesser deities that were organized and received instruction from King Yama, who was more of an administrator.

During the Tang Dynasty, Taoist influence began to take over. As the Taoist beliefs took hold, a realignment of hell took place and King Yama was one of a set of ten kings of hell. The kings of hell were assigned by the Jade Emperor, with King Yama being the primary and most famous.

In later versions of the myth of King Yama, he is actually demoted from his position for being too lenient on sinners. In other versions, King Yama is not necessarily a person as much as it is a title. An individual could serve a term as King Yama in hell, and then reincarnate back to the earthly realm. Some mortals, such as Bao Zheng (a famous judge who lived during the Tang Dynasty) were even rewarded the position of King Yama for living an honorable life.

The Chinese god of death is still honored today

Belief in King Yama is still common throughout the world, especially in Asiatic countries. It is tradition for people to purchase and burn hell money (also called spirit money or ghost money) for those that have passed on are provided for in the afterlife. Souls that wander the mazes of hell need money to buy food and services to help them get to the end of their journey.

Hell money, which features King Yama’s face or symbol, is purchased by the living and then burned during the funeral and grieving process, making its way in spirit form to those in need.

Due to his popularity across multiple religions, King Yama is regularly depicted in theater, literature, artwork, television shows, and movies. 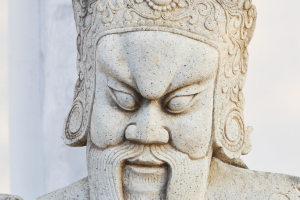 In Chinese mythology, King Yama is known as the lord of death and king of hell. As the ruler of the underworld, called the Diyu, King Yama also judges the dead.

As the Chinese god of death, he is a feared god in multiple belief systems including Chinese and Japanese folk religion and mythology, Hinduism, Taoism, Buddhism, Sikhism, and Zoroastrianism.

King Yama is a potent force in Chinese mythology. As the judge of the dead, Yama was responsible for not just the administration of hell, but the administration of justice for the lives of all who have lived. His punishments determined the evolution of souls and defined the destinies of those to be reincarnated. Still worshipped and feared, King Yama’s impact is still felt throughout in modern world.