Bes: The Dwarf God Who Became The Protector Of Households And Childbirth

In this in-depth bio, you will learn who Bes is, his history, and the many myths and legends credited to his name.

In Egyptian mythology, the Egyptian god Bes is considered the protector of households, mothers, children and birth. Over later centuries, Bes became known as a warrior for good who defended the kingdom of Egypt against all that was considered evil. Bes, also known as Bisu, was also regarded as a fertility god, the deity of humor, and of warfare.

While some archaeological evidence of Bes has been found in the Old Kingdom period, Bes began to rise in popularity during the Middle Kingdom period of ancient Egypt (2030-1650 BC), as historians believe his myths actually began in Somalia or Nubia and were brought to Egypt by traders. However, it was in the New Kingdom period of Egypt (1520 – 1075) that the cult of Bes began to thrive.

Due to the popularity of the ancient Egyptian god Bes, archaeological evidence of his worship has been found as far away as Spain’s Balearic Islands, as well as Turkey and Syria.

Bes is often referred to as the Egyptian dwarf god, and he is usually depicted with a large head and protruding tongue. Unlike other Egyptian gods who are depicted as statuesque, Bes is typically shown with bowed legs, a bushy tail, bearded, with oversized genitals, and his head is often adorned with a crown of feathers.

Bes is usually depicted carrying a rattle or a snake, a knife, and a sword. Images of Bes were often placed at house gates or doors, and temple birth houses always had a depiction of Bes watching over entrances and birth rooms.

Bes, and his role as depicted in Egyptian artwork

As Bes was considered the god of women in childbirth, many temples (such as the Temple of Hathor at Dendera) had a Bes Chamber, which were decorated with images of Bes cavorting with his large erect phallus and a naked goddess. It was believed artwork like this would encourage safe childbirth and quick healing. It was common practice for pregnant women to carry objects with Bes’ image, and it was not out of the ordinary for women to have images of the misshapen dwarven god tattooed on their bodies.

Depictions of Bes were commonly found on vases, mirrors, brushes, and other personal items around the home. The dwarf god was also depicted on charms worn around a woman’s neck called a Bes Amulet.

“Egyptian old wives probably told stories about the antics of Bes, but they do not survive in the written record. The evidence for dwarf deities is mainly pictorial. They appear on magical objects, bedroom furniture, and items used to contain or apply makeup. Bes amulets and figurines were popular for over 2,000 years. Some women even decorated their bodies with Bes tattoos to improve their sex life or fertility.”

Beginning in the New Kingdom period of ancient Egypt, Bes was usually depicted with the pregnant goddess Tawaret. Pinch went on to write:

“Bes and Taweret were also the guardians of the divine infants worshipped in the Birth Houses of temples of the first millennium BCE. Temple and magical texts give Bes or Bes-Shu the role of opening the womb to allow a child to be born. These birth houses were a regular aspect of temples all over Egypt and featured statuary or inscriptions of Bes outside and wall paintings of Bes and Taweret inside. One of the best-known images of Bes, in fact, comes from the birth house at the Temple of Hathor at Dendera. Scenes from these birth houses were often painted on the walls of homes and even appear on the walls of the worker’s house at Deir el-Medina to encourage fertility and ensure protection.”

Modern historians suggest that Bes’ disfigurement was intended to scare away evil spirits, while others suggest that Bes was a trickster who used his grotesque appearance to inspire humor. And unlike other Egyptian gods who were depicted in profile, Bes was always shown full-faced.

Who is Bes in Egyptian mythology?

Bes is the ancient Egyptian deity of childbirth, protector of households, and of women and children. Bes was also thought of as a god of humor, warfare, and fertility.

While Bes was considered extremely popular throughout the Mediterranean and substantial artwork remains of Bes’ exploits today, no origin story of Bes has ever surfaced. As Bes is known as an extremely minor god in the Egyptian pantheon, he shares traits with nine other known Egyptian deities – Tetetenu, Aha, Sopdu, Amam, Segeb, Hayet, Menew, Ihty, and Mefdjet. However, unlike the nine similar deities, Bes is the only one who was the protector of women in childbirth.

Bes was not considered a god in the same breath as Ra or Anubis. Neither did Bes have a specific temple or cult center dedicated to him alone. However, though Bes was not a god in the same sense of the primary gods of Egypt, Bes will still honored in the homes and workplaces of the Old Kingdom all the way to the end if the Roman occupation of Egypt (approximately 3,300 years).

In fact, during the time of the Roman occupation, Bes had become more than just a protector of women and children, but Bes was looked upon as the protector of anyone who sought his help. Both Egyptian and Roman soldiers would honor Bes before battle and would inscribe his image on their shields. Additionally, Bes engraved goblets have been discovered at the sites of ruined Roman military garrisons.

– Bes as warrior and protector 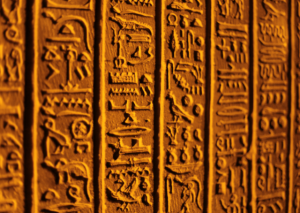 As the protector of those under his care, Bes was often honored as an Egyptian god of war. By the New Kingdom period, Bes was seen as a skilled warrior who used his power to face off evil at every turn.

In keeping with the Egyptian principle of balance, while Bes was known as a vicious and cunning warrior, he was often depicted showing his softer side, seen in artwork as dancing, laughing, and singing. Bes was particularly partial to young children, and he was known to entertain them with songs. If a child let out a laugh or giggle, Egyptians often credited Bes with lightening the mood. Of Bes, Egyptologist John Gardner Wilkinson wrote:

Despite his appearance, which changed in many details over time, Bes was deemed beneficent to humans and he was accepted by all classes of Egyptians as a powerful apotropaic deity [one who wards off evil and protects against bad luck…Just as the Bes figure subsumed various minor gods and demons, in later times he was himself syncretized with other protective deities, forming the `core’ of a composite deity whose elements included Amun, Min, Horus, Sopdu, Reshef and other gods. Mythologically, Bes could also be associated with Ra, Hathor, and Horus – and a female form of the god, Beset, sometimes appears as the mother of Horus.

– Bes, the guardian of youth

More than a protector of women in childbirth, Bes was honored as a protector of infants and was often called upon by parents to watch over their young. It was common to have a Bes statue standing guard over a young child’s crib or cot, and Bes’ name was often invoked as a guardian angel of sorts through nightly prayers and rituals.

While the ancient Egyptians were an incredibly advanced culture, levels of infant mortality were very high. Early childhood was considered a worrying time for many mothers, as even a simple illness could cause a devastating result. Parents put a great deal of trust in magic, employing the use of amulets, charms, spell, and rituals to ward off evil and bring hope to their homes.

When a parent sought out a blessing for their children at a local temple, magic spells were given by priests or seers and then written down on papyrus, then usually rolled up and slid into an amulet or statue. As the parents often could not read, a simple rhyming incantation would be taught to the parents or guardian of the child.

The parent would then be given a simple set of instructions for the proper ritual. In the case of Bes, mothers would draw an outline or the name of Bes on a child’s left hand, then the child’s hand would be wrapped in a cloth that had been prayed over by a temple priest. This was believed to ward off nightmares and drive away negative spirits from the child while sleeping.

Often, these simple rituals and rhymes came to be passed down generationally, often with small adjustments for each particular family. This phenomenon is very much like our simple modern lullabies used to soothe infants to sleep or give good dreams (that much like ancient Egypt, were once rooted in folk magic and incantations).

The Ritual of Bes

The best-known ritual invoking the name of Bes to watch over children comes from the Magical Lullaby, also called the Charm for the Protection of a Child. Over 3,500 years old, the lullaby was intended to ward off ghosts and demons from attempting to kill or sicken a child. It was sung while soothing the child to sleep, often stroking the child’s head or tracing circles upon the child’s skin.

– Charm for the Protection of a Child

Run out, thou who comest in darkness, who enterest in stealth, his nose behind him, his face turned backward, who loses that for which he came.

Run out, thou who comest in darkness, who enterest in stealth, her nose behind her, her face turned backward, who loses that for which she came.

Comest thou to kiss this child? I will not let thee kiss him.

Comest thou to soothe him? I will not let thee soothe him.

Comest thou to harm him? I will not let thee harm him.

I have made his protection against thee out of Efet-herb, it makes pain; out of onions, which harm thee; out of honey which is sweet to living men and bitter to those who are  the dead; out of the evil parts of the Ebdu-fish out of the jaw of the meret; out of the backbone of the perch.

Bes is my guard; Bes upon his perch; He will not let thee harm him.

Bes, god of childbirth, protector of all under his care

In the mythology of ancient Egypt, Bes was the deity of childbirth, guardian of households, and of protector of women and children. Bes was also thought of as a god of humor, warfare, and fertility. By the time of the Roman Occupation, Bes came to be known as a protector of anyone who sought his aid.

While no temples were dedicated to him, nearly every household of ancient Egypt, from Pharaoh to slave, honored his name.

While considered a minor god, especially in comparison with the mighty gods of Egypt such as Ra, Osiris, and Isis, Bes carved out a very important role in Egyptian society. While no great monuments bear his name, the dwarf god Bes’ impact was felt by every single Egyptian family for over 2,500 years.