Nut: Get To Know the Protective, Prolific Goddess of the Sky 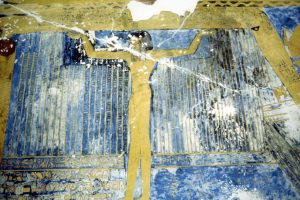 Many people today might not know specifics about the story of Nut goddess. However, they will instantly recognize her in the artwork of ancient Egyptian tombs depicting this beautiful goddess of the sky. Despite her limited appearance in myths, Nut was a highly prized goddess and one of the most well-known and respected Egyptian deities. Find out more about her by reading this article.

The Origins of Nut’s Worship

In ancient cultures where the climate was moderate, people thought of the sky as male and the earth as female. This is a thinly veiled sexual analogy: the droplets of rain sprinkle down upon the earth, making it fertile. In desert climates, however, the moisture of the earth evaporates into the sky. Egyptian mythology indicated this difference with a gender reversal, making Nut the goddess of the sky and her brother Geb god of the earth.

Egyptians had an uncanny awareness of the world around them, and they believed that the gods influenced every moment and aspect of their lives. Naturally, Nut as the Egyptian sky goddess was a prominent figure. With no skyscrapers to impede the view, the desert sky was a vast and powerful element. They felt Nut’s presence day and night, and she protected them from the moment of birth until far into the afterlife.

Who Is Nut in Egyptian Mythology?

Scholars differ on how to pronounce Nut’s name, but “newt” is likely the most accurate. The word nwt means sky, and it is spelled in different variations, including Nut, Nunut, Nent, and Nuit. Later, her name would become the root of many words we use today, such as night, nocturnal, and equinox.

The Image of Nut

Nut Egyptian god was essentially the personification of the sky and celestial bodies. She protected the earth from the chaos of space. Most often, she appeared as a naked woman covered with stars, stretching over the earth — who was her brother, Geb. Her headdress was the water pot that was present in the hieroglyphic representation of her name. The pot may have also represented the uterus, paying homage to her motherhood.

In most images, she is giant compared to the other figures pictured. This represents the great vastness of the vault of the heavens. Her fingers and toes are said to touch the four corners of the earth. When she was sad, her tears became the rain, and worshippers believe that the thunder was her laughter.

The Imagery Around Nut

Occasionally, Nut was also viewed as the Great Kau (Cow), stretching protectively over the earth as she does in her human form. Her eyes were the sun and moon. With her enormous udders, she created the Milky Way. Less frequently, records compare the Egyptian sky goddess to a giant sow, ready to suckle her piglets (the stars). Each night she would eat her piglets so that they disappeared each morning when the sun appeared.

Nut represented the sky both in the daytime and at night and assisted with the transition between the two. Each day, Ra would travel across her body in the sun-boat. When he reached her head, Nut would swallow the sun, and the earth would be plunged into the darkness of night.

Over the next several hours, the sun would travel through Nut’s body until, finally, she would give birth to the sun in the morning, beginning the daily cycle once again. Often, pictures of the goddess would include ten solar discs along the length of her body, showing the nightly path of the sun.

While dead souls awaited judgment, Nut protected them from the evil demons and snakes in the afterlife. She also assisted the great souls in becoming stars in her firmament. The inside of many tombs was painted blue and adorned with stars to honor Nut. Her image was also present on the inside lid of the sarcophagus so that she could stretch over the corpse and protect it until the time of the person’s resurrection.

One of the symbols associated with Nut was the maqet, the ladder that Osiris used to climb into the sky and become the constellation known as Orion in modern times. This ladder appeared in the tomb paintings of Nut. Often, the families of the dead would include a real ladder in the tombs to assist the departed’s soul in reaching the arms of Nut.

The combination of Nut’s duties in the underworld brings to mind the classic children’s game, Snakes and Ladders. Nut also had a handful of nicknames, such as Coverer of the Sky, She Who Protects, She Who Holds a Thousand Souls, Mistress of All, and She Who Bore The Gods. 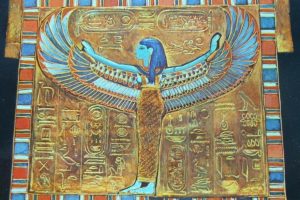 Since creation stories were initially handed down through oral narrations, several variations circulated in different cults of worship. The nine principal gods in Egypt were known as the Ennead, and their central cult operated in Heliopolis. By far, the creation myth involving the Ennead was the most popular in Egypt. People believed that the story of creation itself took place in Heliopolis.

In the beginning, there was nothing (Nun), a dark void. This nothingness is similar to the primary condition related in Genesis: “And the earth was without form, and void, and darkness was on the face of the deep.” A hill rose from the nothingness, and upon it was Atum, also called Ra.

– The Birth of Nut and Geb

However, the two sibling gods remaining perpetually locked together in sexual intercourse was troubling to Ra, though the myth does not record the reason. At that point in the creation myth, he was without a consort, so it may have been sheer jealousy. Regardless of Ra’s feelings, with the sky and the earth crushed together, there was no room for creation to take place.

– The Separation of Earth and Sky

Ra commanded Shu to do something about his continually copulating children. Thus, Shu stepped between Geb and Nut to separate them. Classical artwork shows Geb reclining, looking up at his sister stretched across the heavens, with Shu standing between them. This act explains why the sky and the earth are separated by the air we breathe.

Nut still longed for her brother Geb. It was believed that her tears were the falling rain, and storms occurred when she struggled to get close to her lover.

The Birth of the Gods and the Creation of the Calendar

The birth of Nut’s children provides us with another explanatory myth. This one is about how the calendar year came to contain 365 days. According to this myth, the original calendar only included 360 days.

Although Shu did manage to separate Geb and Nut and put an end to their promiscuity, it was too late: Nut was already pregnant. This made Ra extremely angry, and he decreed that Nut could not give birth on any day of the year. Not only was this a sad punishment for Nut, but it was also quite painful.

Thoth, the god of knowledge and wisdom, formulated a scheme by which poor Nut could get around Ra’s edict and relieve her swelling belly. Thoth confronted Iah, the Moon, and goaded him into a dice game. Iah gambled away enough light that Thoth could create an extra five days on the calendar, called the “epagomenal” days. Since these days were not part of Ra’s original calendar, Nut was able to give birth, one child on each of the extra days:

These five children, plus their parents (Nut and Geb) and grandparents (Shu and Tefnut), became the Ennead.

The Worship of Nut in Heliopolis and Beyond

Several festivals honoring the Egyptian sky goddess were held throughout the year, including the Festival of Nut and Ra and the Feast of Nut. Despite her widespread fame, archaeologists have not uncovered any temples dedicated to Nut alone. However, a small shrine called the House of Nut was found in Memphis.

The worship of Nut was among the rites for the Ennead that took place in Heliopolis. Also, Nut became associated with Hathor, and she figured heavily in the imagery found in Hathor’s temple at Dendera.

Nut did make notable appearances in the Coffin Texts, the Pyramid Texts, and the Book of the Dead, all of which governed the rites of mummification and burial. Another book that dates back to around 2,000 BCE was a collection of ancient astronomical texts called The Fundamentals of the Course of the Stars. Because of Nut’s prominent role in the text, it was renamed in more modern times as The Book of Nut. 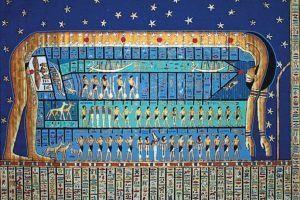 Egyptians remembered Nut’s existence every time they went outside. Her omnipresence contributed to her lasting fame and respect. Here’s a review of the basic facts about Nut:

Though there was no specific cult center linked to Nut, she was a highly respected deity throughout ancient Egyptian history.