Khepri: The Scarab God Who Rolled the Sun Across the Sky 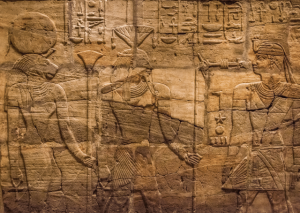 In this in-depth article, we will be going over who Khepri is in Egyptian mythology.

You will also learn more about the meaning of his name and his role in the lives of ancient Egyptians.

Who Is Khepri in Egyptian Mythology?

In the mythology of ancient Egypt, Khepri (also known as Khopri, Khepra, Chepri, and Khepera) was the god of the morning sun who also represented creation, restoration, and resurrection in the afterlife. Typically described as the scarab-faced god, Khepri was considered a self-created deity similar to Atum.

While no temples solely dedicated to Khepri’s name have been discovered, it is believed that a statue of Khepri stood in every significant Egyptian temple by the end of the New Kingdom period (1550 – 1352 BC).

The Meaning of Khepri’s Name

The ancient Egyptian verb kheper (hpr) meant “to come into existence,” “to become,” “to transform,” or “to emerge.” As Khepri was symbolic of the rising sun that was reborn in the East each morning, Khepri’s name was the literal root of the word that meant “to come into being.”

The name Khepri first appeared in the Pyramid Texts during the Old Kingdom period of Egypt (circa 2700 – 2200 BC). Funerary artists used a scarab to denote Khepri’s hieroglyph, as the solar deity was intimately linked to the dung beetle, and therefore creation and life from death.

Mummified scarabs and amulets have been discovered in tombs dating to the Predynastic period of Egypt’s history (6000 – 3150 BC), indicating that the worship of Khepri was widespread before the pharaohs even took the throne. Because of Khepri’s long-standing place in Egypt’s religious history, many pharaohs incorporated Khepri’s name as their own.

Some of Khepri’s official titles were “The Extant,” “The Being,” and “He Who Is Coming Into Being.”

Due to Khepri’s enduring association with the scarab beetle, he was typically shown in temple and tomb depictions (as well as funerary papyri) as a male with a scarab for a head. Other representations depict Khepri as a human face emerging from a beetle, as a man wearing a scarab as a crown, and simply as a scarab. Khepri was also commonly depicted as a passenger on Atum-Ra’s solar barge.

Some of the more famous depictions of Khepri are found on Scarab Amulets. To invoke Khepri’s daily blessing, Egyptians would wear scarab amulets around their neck as jewelry, as the amulet represented new beginnings and the rebirth of the new sun. These jewelry depictions of Khepri have been found at archeological sites around the Mediterranean Sea.

Heart Scarab Amulets were inscribed with prayers from the Book of the Dead to remind the dead’s heart “to not stand witness against me” during judgment.

Khepri’s Role as a Solar Deity

Khepri played an essential role in the lives of ancient Egyptians as he was the god of the reborn sun. Not understanding that the earth revolved around the sun, they believed that the sun died every night in the west, traveled through the underworld, and was reborn every morning. Khepri represented the reborn sun as it began its daily path across the sky.

As Khepri was the sun at daybreak, Ra represented the midday sun, and Atum, the dying sun at dusk. Over Egypt’s history, Khepri (like Atum) would eventually become regarded as an aspect of Ra instead of an individual god.

Various myths of Khepri equated his solar role with his association with the scarab beetle. As scarabs were dung beetles, they rolled dung into balls and rolled them along the ground to their lairs. 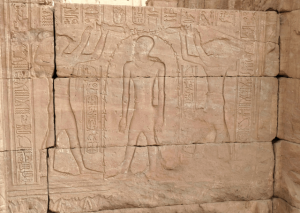 Much like a scarab, Khepri was charged with rolling the sun disk unceasingly across the sky. As the day ended, Khepri would push the sun into the underworld, where the sun would travel throughout the night and be reborn in the morning.

Further connecting Khepri with the dung beetle was that scarabs had antennae on their heads that were used to push dung along. When doing this, the dung appeared as a ball between two antennae. This was akin to the round sun disk between two horns that many Egyptian solar deities were pictured within tombs and temples.

Khepri and Atum, the Self-Created Gods

Of the over 2,000 ancient Egyptian gods, Khepri was one of the few that were self-created. While there were several versions of the Egyptian world creation myth, the creation myths sourced from Heliopolis and Thebes established Khepri’s place as an aspect of the first god Atum (later Atum-Ra).

As Atum was self-created and rose from chaos, Khepri similarly rose from nothingness, earning the title “He Who Is Coming Into Being.” This myth, again, linked Khepri to the scarab.

The ancient Egyptians believed that scarab beetles emerged from nothingness. The eggs from scarabs are very tiny and are usually laid in dung or rotting carcasses. To the ancient Egyptian mind, when a scarab was born, it seemed as if the scarab appeared from where there was nothing before.

As Khepri was believed to have been self-generated, and as he represented the sun that was reborn each morning, the comparison stuck. Throughout thousands of years of worship, Khepri would be symbolized by the scarab.

The Scarab God in the Afterlife

As the scarab god, Khepri represented restoration and resurrection in the afterlife. As the scarab often laid tiny eggs in dead carcasses, when the young scarabs were born, it seemed as if they were born from where only death was before.

Because of this, Khepri was not only linked to the solar god Atum in symbolizing new life but was connected to Osiris, the god of the dead, to represent rebirth in the afterlife. Due to this association, Khepri assumed a major role in the Egyptian Book of the Dead and the Amduat (book of the Secret Chamber) during the New Kingdom period (1550 BC) until circa 50 BC.

One of the more common practices of ancient Egyptian burials was the placement of Khepri’s Heart Scarab Amulet upon the chests of the deceased. During the mummification process, the intestines, stomach, lungs, liver, and brain were removed.

However, the heart was left in the chest because the Egyptians believed that the knowledge and memories of the deceased were stored in the heart and that a person would need these things in the afterlife.

A Heart Scarab Amulet was placed upon the chest inscribed with Khepri’s name, and during the mummification process, it was believed that the amulet would be infused with the weight of the deceased’s choices in life.

However, if the amulet weighed more than the feather, the deceased would be devoured by Babi, the baboon god, or Ammit, the crocodile-headed goddess. Khepri’s Heart Scarab Amulets were typically inscribed with spells and prayers to remind the heart not to “stand against” the deceased in the courts of the Duat.

Ancient Egypt honored Khepri as a god of creation, restoration, and resurrection, more than just a solar deity representing the morning sun.

While not mentioned in the same breath as Ra, Osiris, or Horus, Khepri held one of the most important roles of any of the gods of the ancient Egyptian pantheon, that of daily rebirthing the sun and establishing its path across the sky.

Thus, while there were only a few temples dedicated solely to the scarab-headed god, Khepri played a powerful part in the lives of ancient Egyptians for almost 6,000 years.