Geb: Get To Know the Father of the Gods and Grandfather of Pharaohs 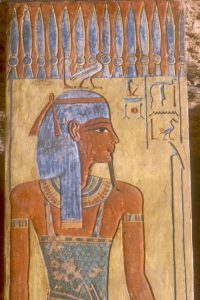 Geb, Egyptian god of the earth, was a unique deity. In most mythologies, the Earth is a goddess, likely because fertility is usually associated with womanhood. However, in Egypt, the earth was male. Perhaps, Geb’s penchant for sex became part of his myth to emphasize a man’s fertile nature as well.

Geb’s name is occasionally spelled Qeb, Seb, or Keb due to debates over the actual pronunciation. The name Geb might roughly translate as “the lame one”. Despite the underwhelming name, this god was one of the mighty kings of Egypt.

Who Is Geb in Egyptian Mythology?

Above all else, Geb was the personification of the Earth, which was sometimes called “the House of Geb.” The concept of earth included the lush vegetation above and the caves full of minerals and precious stones below. The ancient Egyptians believed that earthquakes were the rumbles of Geb’s laughter.

Geb as the God of Nature and Harvest

As the Egyptian god of nature, he was often depicted as a bearded man with green skin. He commanded the ground to be fertile and yield bountiful crops. For this reason, he was also the god of the harvest. In collective imagery, barley grew on his ribs. This brings to mind the later Celtic grain deities like John Barleycorn. When serving as the harvest god, Geb was sometimes paired with Renenutet — the cobra goddess — as his consort.

Geb was also the father of snakes, which were often called the Sons of the Earth. Many pictures show him with a snake wrapped around his shoulders. Occasionally, he would adopt a snake’s head. He was also sometimes anthropomorphized as a ram, a bull, or a crocodile.

Since the hieroglyphic representation of his name was a goose, he often wears a goose on his head, or a goose head replacing his own. In this form, he was often called Kenkenwer, “the Great Cackler.” His association with the waddling goose might have led to his description as “the lame one.”

Geb’s Ties with the Underworld

Naturally, Geb was heavily associated with tombs and the Underworld because they both existed inside the earth. In the afterlife, he served as one of the judges in the divine tribunal of the gods. He witnessed the weighing ceremony, where a dead person’s heart was weighed against the Feather of Truth. If the person failed the test, Geb would trap the soul within his body. In some versions of the myth, Geb assumed his crocodile form and would devour the souls of the unworthy.

Among the representations of Geb, particularly famous is the image where he is reclining on his side underneath Nut, the goddess of the sky. His bent legs and arms represented the mountains and valleys of the earth. When standing, he carried a was-scepter, the symbol of strength, and the ankh, the symbol of life. He wore either the Atef feathered crown of Osiris or the white crown of Upper Egypt.

Like other mythologies, the Egyptian creation myth has several variations, usually centered around a set of gods, worshipped in a certain city. Geb was part of the group called the Ennead, the nine primary gods whose cults centered in Heliopolis. Therefore, among ancient Egyptian gods Geb occupied a prominent role.

These nine gods were also prominent in Egypt’s other major cities. The Ennead creation myth is the most widespread. The worshippers who promoted this myth believed that the creation of the universe occurred precisely in Heliopolis.

The universe started as Nun: nothing but a dark, nebulous, primordial soup. From this void rose Atum, the self-born, also called Ra. With an act of self-pleasuring, he created the deities Shu (Air) and Tefnut (Moisture). These two deities became the parents of Geb, god of earth, and Nut, goddess of the sky.

Geb and Nut: Siblings or Lovers?

One of the explanatory myths of Egyptian mythology is the prolific relationship between Geb and Nut. After their birth, Geb and Nut became sexually involved and remained perpetually locked into each other’s arms. Ra was offended by their constant copulation and, eventually, he ordered their father Shu (Air) had to separate them. To the early Egyptians, this myth illuminates the separation of the earth and sky by the air around us.

The classic artwork representing Geb and Nut demonstrates this concept. Geb reclines below, looking up longingly at Nut, who stretches high above him. Shu is pictured standing between them with arms reaching upward, holding the two apart. Geb continued to pine for his sister, and his salty tears created the world’s oceans.

Geb’s Children and the Creation of the Calendar Year 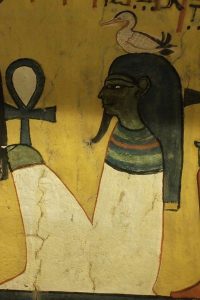 Geb and Nut sired five of the most significant deities. The story of their birth contains yet another explanatory myth. As stated before, Shu managed to separate the lovers, but Nut was already pregnant by that time. Ra was so enraged that he forbade Nut to give birth on any of the days of the year. Needless to say, this caused Geb much grief and caused Nut significant discomfort.

Luckily, the god Thoth found a loophole. At the time, the annual calendar contained only 360 days. Thoth gambled with the moon, and for his prize, he received 1/72nd of its light — about five days. These five new days were not under Ra’s restrictions, so Nut was free to give birth to Osiris, Horus the Elder, Seth, Isis, and Nephthys. In this manner, the annual calendar stretched to the 365 days that we know today.

The devotees of Geb and Nut in Heliopolis popularized one more variation of the creation myth. They believed that the union of the two deities created the great egg, from which hatched the sun god Ra in the form of a phoenix. This story can be confused with another alternate creation myth, in which Thoth, in his ibis form, laid the cosmic egg that contained all of creation. The Egyptians, however, did not seem to mind the contradictions. Indeed, each center of worship could have differing views on their gods based on their own needs.

As Geb was separated from his sister-wife, his unquenchable lust had no outlet. Thus, he became obsessed with the idea of seducing his mother, Tefnut.

Shu single-handedly fought the followers of the serpent Apophis (Apep), the god of chaos. He won but was injured, and he escaped to the heavens to recover. Geb saw his chance, found his mother and raped her. The evil deed caused nine days of darkness and storms.

Because of his wounds, Shu decided to retire, and he named Geb his successor. When Geb reached out for the crown, the uraeus serpent on the crown read the guilt in his heart and bit him. Geb faced certain death, but Ra applied a lock of his hair to the wound, and Geb recovered. After this punishment, the uraeus serpent allowed Geb to wear the crown and take the throne. As a king, he was considered a great ruler.

Geb’s Role as Grandfather of the Pharaohs

After Ra and Shu, Geb was the third great divine ruler of the world. As such, he gained the name of Erpa, the tribal chieftain of the gods. His reign was ordered, abundant, and prosperous. His role as father to Osiris and Seth and grandfather to Horus added to his greatness.

When Geb abdicated his kingship, he gave his son Osiris the throne, much to Seth’s dismay. To keep the peace, Geb decided to divide the land between them. Horus received the part of Lower Egypt near the Nile Delta, whereas Seth gained the throne of Lower Egypt in the south. Unfortunately, this did not stop the sibling rivalry.

Seth killed Osiris and dismembered his corpse. Though Osiris was resurrected, he could no longer rule over the living. Geb supported Osiris’s son, Horus, as he fought Seth for the kingship of the world.

Pharaohs and the Cult of Geb

Pharaohs expressed particular deference towards Geb. Since the pharaohs considered themselves the living embodiment of Horus the Younger, this made them Geb’s grandchildren. Therefore, pharaohs were called “the Heirs of Geb,” and the pharaoh’s throne was called “the Throne of Geb.”

Geb appeared prominently in the rituals that transferred power from one pharaoh to the next. In one ceremony, the priests would release four wild geese, symbols of Geb. The geese were sent to the four corners of the earth so that the new king would be fortunate and prosperous.

In Ptolemaic times, the Greeks considered Geb a form of Cronus, since they both fathered the prominent gods of the religion. However, Geb was the earth while Cronus was the sky, and Geb didn’t dine upon his children.

The Worship of Geb and the Ennead at Heliopolis

The oldest recorded depiction of Geb dates to around 2600 BC. Archaeologists discovered it in Heliopolis, located near Cairo. Heliopolis was a center of worship for many of the ancient Egyptian gods, Geb and the Ennead being the most prominent. The nine gods of the Ennead were Atum (Ra), Shu, Tefnut, Geb, Nut, Osiris, Isis, Seth, and Nephthys. They represented the creative forces of the universe and influenced the natural and political order of Egyptian civilization.

While Geb did enjoy some worship from farmers, miners, and others whose lives centered around the earth, he was most often worshipped as a member of the Ennead. He did have significant cults of his own in Edfu and Dendera, about 40 miles from Luxor. Geb’s worshippers at Dendera were often called the Children of Geb. 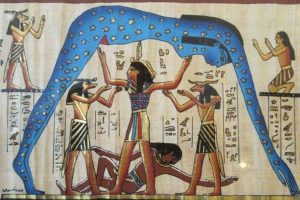 According to the Egyptians, Geb was a mighty god, a powerful king, and a prolific father. Without his contributions to Egyptian legends, the stories we know today would not exist.

Though he is not remembered in modern times as much as his children, his influence on Egyptian mythology was significant and enduring, and his name was a household word in Ancient Egypt.