Mainstream discussions of Egyptian mythology today often omit Heqet, the frog goddess. During the ancient Egyptian period, the people recognized her as an important deity, and she was honored by commoners and royalty alike. In a desert, the appearance of a frog is a welcome sight, a signal that life-giving water is nearby.

Who Is Heqet in Egyptian Mythology? 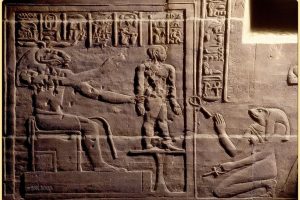 In English, Heqet’s name is sometimes spelled as Hequetat, Hekat, or Heket, whereas in Egyptian, vowels were often omitted, leaving the name Hqt. Scholars suggest that the name originated from the word heqa, which means ruler or scepter. Heqa may also be the name origin for the Greek goddess Hecate.

Calling Heqet an “Egyptian god of frogs” is a misnomer; she didn’t govern frogs. Instead, she was in charge of what frogs represented. After the annual flooding of the Nile, Egyptians watched as thousands of frogs appeared as if by magic, rising from the new, rich soil that had washed downstream. Therefore, Heqet, in her frog form, represented life, abundance, fertility, and the germination of grain.

Through her association with fertility, Heqet became a goddess of childbirth, and she helped make the process as safe and swift as possible. She protected pregnant women, for it was she who placed the child in the mother’s womb. Heqet breathed life into all living beings, and she could also use the breath of life to resurrect the dead and assist them through the underworld.

Heqet appeared as a frog or a woman with the head of a frog. Naturally, she considered frogs her sacred animal. She held the ankh in one hand as a symbol of her connection with birth and rebirth. On her other hand, she often carried rounded ivory wands or knives which looked like a boomerang. These knives were not instruments for cutting but for protecting the user from natural harm or evil spirits.

– The Egyptian Creation Myth and the Rise of the Ogdoad

Heqet was often considered the daughter of Ra, but she is likely much older. As a primordial deity, Heqet was one of the earliest gods worshipped in Egypt. Opinions differ, but she may be one of the Ogdoad, a group of ancient Egyptian frog god that existed before the dawn of creation. Because of the well-developed cult centers in Egypt, there are several versions of the creation myth; therefore, the following story is only one option.

In the beginning, there was Nun, nothing, the endless void. However, Nun was quite full for something called nothing. This void was actually four pairs of deities that represented the qualities of this void:

Together, these deities created the primordial mound, on which appeared Atum, the self-created god. Atum, later conflated with Ra, was directly or indirectly responsible for creating all other gods, and therefore, the universe.

Likely, Hauhet was the earliest form of Heqet, though many scholars disagree. Most report that in the Ogdoad, the males wore frog heads, while the females wore the heads of snakes. However, a few sources suggest that the opposite was true, and the women were the frogs. Conflicting stories are such a part of Egyptian mythology that there were probably many theories about Heqet and the Ogdoad.

– Heqet’s Role in Bringing Life into the World 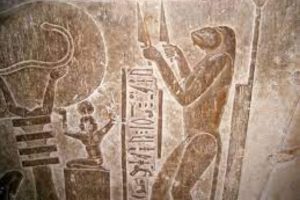 Heqet was the wife of Khnum, the ram-headed god of water and fertility who protected the source of the Nile. The pair were responsible for the creation of every living thing. According to myth, Khnum took the rich clay from the Nile and used his potter’s wheel to create each person. Heqet used the Breath of Life, known as ka, to awaken each clay creation before placing it in its mother’s womb. The Osiris myth records that she breathed life into the new god Horus.

Further, Heqet protected the mother throughout pregnancy. Women often wore amulets of Heqet to become pregnant and protect the child during its development. Heqet could induce labor and protect the mother and child through the birth process. One of her titles is She Who Hastens the Birth. Often, the women assisting with delivery would carry ivory knives and clappers inscribed with Heqet’s name, believing they would help ward off evil spirits.

In the Egyptian language, there wasn’t a word to represent midwife. Therefore, the priestesses who assisted with childbirth often adopted the epithet Servant of Heqet.

– Heqet and the Story of the Birth of the Three Pharaohs

Heqet’s midwife skills came into play in a myth recorded on the Westcar Papyrus, dating back to the Fifth Dynasty. The tale has many similar names due to differences in translation, but the most recognized titles are Story of the Birth of the Three Pharaohs, Birth of the Royal Children, and Story of the Triplets.

According to the myth, Ruddedet, the Royal Mother, was about to give birth to three sons who would all become pharaohs in time. To aid in her delivery, Ra himself sent three goddesses: Heqet, Isis, and Meskhenet. Finding the entrance to the birthing chamber guarded, the three goddesses disguised themselves as simple dancing girls so that they could enter and aid Ruddedet without undue attention.

Heqet quickened the labor and ensured the safety of the mother and infants. Isis called the babies by name (Userref, Sahure, and Keku) and urged them one by one from the womb. The infants emerged strong and healthy, with royal headdresses of lapis lazuli already on their heads. When she laid eyes on the boys, Meskhenet foretold their future as great kings.

The family tried to pay these mysterious dancing midwives with a sack of grain. Secretly, the goddesses tucked three crowns into the sack of grain and then left it with the family for safekeeping. One day, Ruddedet realized they needed to make beer, and the only grain in the house was the sack meant for the midwives. Ruddedet neared the sack, and she heard sounds of joy and merrymaking. When she opened it, she found the three crowns amidst the grain.

– Heqet’s Role as Guide in the Underworld

Since frogs were associated with water and dark places, they were considered creatures of the underworld. Heqet, too, had her place in the underworld, one for which she was uniquely suited. She used the Breath of life to awaken the mummified bodies of the pharaohs. With her ivory blades, she severed the ethereal cords that bound them to their earthly life.

Heqet also served as their guide and accompanied them as they made their way to their final resting places in the starry skies. Since space was a dark void, like the primordial Nun, Heqet seemed quite at home on this journey. In Greek mythology, the being who guides the dead into the afterlife is called a psychopomp.

As the Osiris myth developed, Heqet took the role of resurrecting Osiris from the dead, using the Breath of Life. Because of her assistance, Osiris was able to rule the underworld instead of disappearing into the stars. Afterward, worshippers recognized a link between Osiris and the frog deity. In Dendera, Heqet is pictured in frog form, sitting under the funeral bier of Osiris.

Heqet’s role in the Osiris myth led to a strange but interesting practice in the Christian era. People still wore Heqet’s frog amulets as before, but on them, they carved the words, “I am the Resurrection,” occasionally adding Christ’s symbols of the cross and the lamb. This pairing denotes a willingness to embrace the new deity while still respecting the old myths.

– The Worship of Heqet in Ancient Egypt

Heqet’s cult existed as far back as the Early Dynastic period, if not further. Her name appeared in some early tombs of the high-born, and a Second Dynasty Prince took her name, calling himself Nisu-Heqet.

In the Old Kingdom Pyramid Texts, she was described as part of a magic spell to ease the deceased pharaoh’s journey to the heavens. Also, the walls in the tomb of Petosiris record the tale of Heqet leading a parade to her own temple at Her-wer. According to the story, she was displeased with its upkeep, and she requested a restoration. Since archaeologists never found this temple, perhaps she did not get the requested repairs.

Archaeologists in the city of Qus unearthed a temple to Horus and Heqet that dated to the Ptolemaic period. In the temple at Abydos, there is an image of Seti I offering wine to Heqet. Carvings at Hatshepsut’s Temple at Deir El Bahri depict Heqet and Khnum presiding over Hatshepsut’s divine birth.

– Heqet Diminished Back into the Primordial Ooze

As with many of the earliest gods in any mythology, Heqet quietly faded from view. Usually, a primordial god’s attributes were absorbed by a more updated, more popular god. In Heqet’s case, Hathor gradually assumed Heqet’s role as goddess of fertility and childbirth. 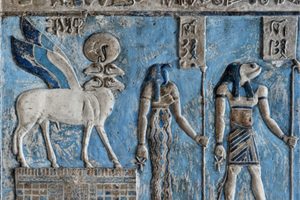 Heqet was far more than just an Egyptian frog god. According to myth, she was one of the earliest gods in existence, and her worship lasted longer than most of her peers. Below are a handful of facts to remember about Heqet:

Though she eventually faded from popularity, Heqet contributed much to Egyptian Mythology and remained a popular figure in ancient Egypt for centuries.