Khnum: The River God Who Molded Mankind Upon His Potter’s Wheel 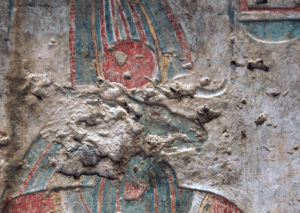 Khnum enjoyed great popularity during Egypt’s early history. As the god of the Nile, he was known to have molded mankind from his potter’s wheel.

In this article, you will learn more about his name and the history of his worship.

Who Is Khnum in Egyptian Mythology?

Khnum was an ancient god of the Nile widely known as the divine potter who created children upon his wheel and imbued them with their ka (divine spirit) before placing them in their mothers’ wombs. By Egypt’s Late Kingdom period (2500 – 1700 BC), Khnum was credited as the primary creator of the gods.

Known as the god of the source of the Nile, Khnum was credited with the fertility of the soil caused by the annual flooding of the legendary river. As the soil of the Nile gave life to Egypt, he was also honored as a god of fertility and creation.

Additionally, Khnum was considered a protector of Ra during his nightly descent into the underworld.

In temple and tomb depictions, the Egyptian god was often pictured as a humanoid figure with the head of a ram or a man wearing the curled horns of a ram and wearing the cone-shaped crown of Upper Egypt. As he was also considered the source of the Nile, Khnum was also depicted pouring out water from a jar.

Evidence of Khnum’s worship exists from Egypt’s Predynastic history (6000 – 3150 BC), where he was depicted as the first domesticated ram, with corkscrew horns that grew out horizontally.

While this species of ram died out during the Old Kingdom (2575 – 2150 BC), Khnum continued to be pictured this way until the Middle Kingdom period (1975 – 1640 BC), where he was more often shown as a ram with inwardly curving horns.

The Names of Khnum and the Meaning Behind Them

The source of Khnum’s name was the ancient Egyptian verb khnem (hnmw), which means to unite or to join. He was also known as Khnemu, Khenmew, Khenmu, Chnum, and Koine.

As one of the primary creator gods of the Egyptian pantheon, Khnum’s official title was “Father of fathers, Mother of mothers.” He was also known simply as “The Creator” and “The Protector.”

Due to Khnum’s popularity during the first wave of pyramid-building in Egypt, the builder of the Great Pyramid of Giza took the name Khnum-Khufu, meaning Khnum is his protector.

Khnum as the Creative Water Deity Who Molded Mankind Upon His Potter’s Wheel
Evidence suggests that worship of Khnum was widespread along the Nile River during Egypt’s Predynastic and Old Kingdom periods, with Khnum appearing in temple and funerary paintings and often mentioned in the Pyramid Texts.

As a water god, Khnum was initially regarded as the source of the Nile and then as the protector of the source of the Nile. He was responsible for the annual flooding that deposited Egypt’s famed black silt along the river, which made the riverbanks fertile. The floodings also created the rich clay that Egyptians would use in their building and creative projects.

As he was responsible for the rich clay along the banks of the Nile, Khnum was closely associated with pottery. One of the most popular depictions of Khnum during Egypt’s early and middle periods was of the god molding humanity and Egypt’s other deities upon Khnum’s potter’s wheel.

For example, at temples located near Esna in Upper Egypt, Khnum was believed to have molded the First Egg from rough clay, which eventually birthed the sun.

Due to his association with the teeming life of the Nile, it was believed that Khnum was not only responsible for creating the bodies of the children and gods of Egypt but also for their ka (divine spirit). As part of the process of creating bodies upon his potter’s wheel, Khnum would imbue them with their spiritual identities.

The blessing of Khnum was highly sought after by expectant parents who petitioned the god for health and wellness for their unborn children, as well as their mental and spiritual acuity.

The Worship of Khnum Through Egypt’s Dynastic History

As Khnum was predominantly considered a water deity and as guardian of the Nile’s source, his primary cult centers were located on the riverside sites of Esna and Elephantine (Abu).

In Elephantine, Khnum was worshipped as a triune god alongside his wife Satis (goddess of the flooding of the Nile and fertility) and his daughter Anuket (goddess of inundation).

During the Middle Kingdom (2040 – 1790 BC), the Temple of Khnum was expanded in Elephantine, and archeological evidence suggests that worship continued throughout the Ptolemaic Dynasty over 1,500 years later (which means Khnum’s worship existed in Elephantine for approximately 3,000 years).

At Esna, Khnum was worshipped alongside Heka (god of medicine and magic), Neith (goddess of weaving and war), Menhet (goddess of war), and Nebtuwi (goddess of the oasis). During Esna’s history, Khnum was sometimes depicted with the head of a crocodile with Nebtuwi as his consort and was known as Father of fathers and Mother of mothers.

Khnum and Nebtuwi were believed to have been the parents of Heka, who would activate the ka that Khnum created and inserted into the children molded upon Khnum’s potter’s wheel. When depicted with Neith, Khnum was called “Father of fathers,” and Neith was called “Mother of mothers.” Together, Khnum and Neith were considered the parents of the sun god, Ra.

The worship of Khnum as a creator god and as a deity of design was especially pronounced during the various pyramid building phases of Egypt’s history (circa 2700 – 1550 BC). Due to Khnum’s relationship with clay and building, he was often invoked by priests and builders to create the strong bricks that have lasted for over 4,000 years.

Khnum was even directly linked with the first pyramid architect, the famed royal priest Imhotep, in the Famine Stele, which was discovered in 1889 by archeologist C.E. Wilbour near Elephantine.

During the Ramesside Period (1292 – 1069 BC), considered the high point of Egypt’s building history, Khnum was honored with statues alongside Isis and Horus at Ramses II’s renowned temple at Beit el-Wali. At Beit el-Wali, Khnum’s statues were also paired with Anuket and Satis just as they were at Elephantine.

At the temple of Tuna el-Gebel, Khnum was honored as the consort of Meskhenet; the goddess believed responsible for breathing the ka that Khnum created into the bodies of the children that were created upon Khnum’s potter’s wheel.

Khnum and the Famine Stele 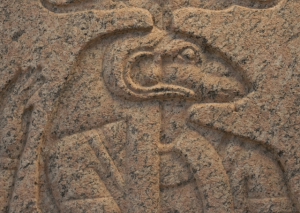 The Famine Stela, which was discovered on Sehel Island and written in hieroglyphic, told the story of a great famine during the reign of the pharaoh Djoser (2687 – 2668 BC). The king wanted to know how to end the drought and appeal to the god responsible for the life-giving power of the Nile, so he sought help from the great priest Imhotep.

After a great deal of prayer and research, Imhotep informed the king that it was Khnum who controlled the Nile and that the god dwelt within a sacred spring upon the island of Elephantine.

After traveling to the island, Imhotep purified himself in the spring and offered the god several extravagant sacrifices. Khnum then appeared to Imhotep and revealed his powers. Due to the honor that Imhotep lavished upon him, Khnum promised to make the Nile flood again.

Upon Imhotep reporting his experience with the god to King Djoser, the pharaoh ordered Khnum’s temple at Elephantine to be opulently renovated and assigned priests to regularly carry out scheduled sacrifices and offerings to the river god.

The king also commanded that the land between the Aswan and Tachompso and everything that dwelt within it is given to the scribes and priests of Khnum’s temple at Elephantine for all time, making the temple one of the wealthiest in Egypt.

Satisfied with the offerings and sacrifices, Khnum brought an end to the drought with a mighty flood, restoring the life-giving silt to the riverbanks of the Nile.

While specific cults in Upper Egypt (primarily located at Elephantine) treated Khnum as the father of Ra, it was widespread throughout Egypt that Khnum was responsible for protecting Ra on his nightly journey into the underworld.

At various times throughout Egypt’s history, the Egyptians believed that Ra sailed his solar barque upon the sky daily, pulling the sun disk behind (some myths place the solar disk upon the barque itself).

Then, at night, Ra would descend into the underworld and would be resurrected or rebirthed in the morning to repeat the process. Khnum was considered one of the chief deities charged with Ra’s protection as he moved throughout the difficult and often tricky terrain of the underworld.

Utterance 300 of the Pyramid Texts describe Ra’s ship as the Ikhet Barque of Khnum’s Creation which meant that not only did Khnum protect Ra, but Khnum was responsible for the creation of Ra’s barge that enabled the god to pull the sun across the sky.

When mentioned in this aspect, Khnum was referred to as Khnum-Ra, and his representations featured the ram-headed god wearing the sun disk of Ra.

Khnum, the Protector of the Dead

Like other powerful Egyptian gods, Khnum had an important role to play in the afterlife. Like he was considered a protector in life, the ram-headed god was also respected as a protective deity in death.

The Egyptian Book of the Dead and the funerary Pyramid Texts regularly invoked Khnum as a defender of the deceased. Heart Scarab Amulets, regularly measuring over three inches wide and placed over the hearts of entombed and mummified corpses, were often inscribed with Khnum’s name, along with that of the scarab-headed god Kephri.

The ancient Egyptians believed the heart held the memories and transgressions of a person’s deeds in life, and Heart Scarab Amulets were said to be imbued with these deeds upon mummification.

It was the amulet which would be weighed against the Feather of Maat in the afterlife, where the soul would either move on to the desired fields of Osiris or would be devoured by the crocodile-headed Ammit, or ripped to shreds by the baboon god Babi who dwelled by the lake of fire.

Many Heart Scarab Amulets were inscribed with an incantation similar to this one, which was transcribed by Egyptologist Thomas J Logan in 1985.

Khnum, the God of the Nile Who Created Humanity and the Gods Upon His Potter’s Wheel 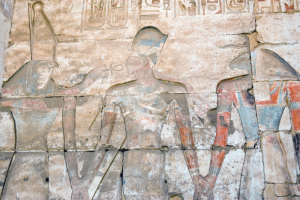 In Egyptian mythology, Khnum was the god of the Nile, also known as the divine potter.

He created children and gods upon his wheel and imbued them with their divine spirit before placing them in their mothers’ wombs.

The Nile River was considered the lifeblood of Egypt. As a god of the Nile, Khnum held an esteemed role within the pantheon of the Egyptian gods. To the ancient Egyptians, he was more than just a simple water god.

He has enjoyed worship from Egypt’s people for over 5,000 years as a divine creator who blessed life through his potter’s wheel and defended the dead during judgment.