Maat: the Goddess who Judged the Hearts of the Dead

In this in-depth bio, you will learn who Maat is, her history, and the many myths and legends credited to her name.

In ancient Egypt, the goddess Maat symbolized truth, balance, righteousness, and justice. It was Maat who decided whom would successfully find a place in the afterlife, as it was the feather of Maat that one’s heart would be weighed against after death.

Maat, also known as Mayet or Ma’at, was the daughter of Ra, the sun god, and was married to Thoth, the god of the moon and underworld. Maat’s role in the Egyptian pantheon was as the representative of order and justice, and the myths and legends of Maat extend to at least the Old Kingdom, almost 5,000 years ago.

Like other advanced ancient societies, the Egyptians recognized what they believed to be good versus evil, and order versus chaos. However, the Egyptians also personified order and chaos through their deities. Chaos’ personification, for instance, was Asfet (Isfet). And representing justice, order, and righteousness, thus standing in opposition to evil, was Maat.

As the Egyptian god of justice, Maat was more than just a mythological figure. Maat was a philosophical idea of peace and harmony in life and death. This was represented by the 42 Confessions of Maat (sometimes called the 42 Principles of Maat) and the 42 Negative Confessions that individuals lived their lives by and then had carved as spells in their tombs in order to assist them in the afterlife.

In Egyptian society, Maat as a goddess represented the personification of balance, truth, order, righteousness, harmony, morality, and justice. These concepts became known as the Seven Principles of Maat, and all Egyptians, including pharaohs and priests, were expected to hold these principles close to their heart.

In the afterlife, Maat stood in judgement of souls through the Egyptian Weighing of the Heart ceremony upon the Scales of Maat. If a heart was burdened with sin and weighed more than Maat’s feather of truth, the deceased soul would be consumed by the vicious Babi, devourer of souls, and in later myths, the crocodile headed Ammit. If the Scales of Maat weighed in the deceased favor, they could then proceed into the afterlife.

The goddess Maat is one of the most easily discernible gods of ancient Egypt due to the wings often pictured under each arm and the ostrich feather (the feather of Maat) that was part of her headdress.

Usually shown as a young woman, often Maat was pictured standing or sitting on a stone platform which represented her firm foundation of order and justice. When pictured seated, Maat often holds an Egyptian scepter in one hand (called a -was-,  a straight staff with an animal head at the top and a forked end at the base), and an ankh (the key of life) in the other hand.

In some drawings and hieroglyphs, Maat is simply represented by a feather or her scale. Because of this, the feather came to be equated with order, harmony, and truth. The scales became associated with righteousness and balance.

Who is Maat in Egyptian Mythology?

Maat is the Egyptian goddess of order, representing justice, righteousness, stability, and harmony. Her scales served to weigh the hearts of the dead against her feather of truth, enabling a soul to proceed into the afterlife or be destroyed. As a concept, Maat stood against that of chaos, and Egyptians were expected to pursue the Principles of Maat to hold off chaos.

In ancient texts, Maat is typically described as being the daughter of the sun god Ra. Maat had no mother, as she was created by Ra when he rose from the water, which symbolized primordial chaos (not to be confused with created chaos).

As Maat was created, she was harmonious, filling the cosmos with her order and justice. But as time went on, disorder and chaos entered the cosmos in the form of Asfet, and humans helped bring further evil into the world.

Maat served to balance the chaos that was brought into the world by wielding righteousness and justice. She spent much of her energies helping pharaohs and leaders rule in harmony with natural and supernatural laws. As part of the function of establishing order, Maat helped to judge souls in the afterlif, so that evil would not be permitted to hold sway through eternity. Every Egyptian sought to honor Maat in some way. To do otherwise was to invite chaos and disharmony into the universe.

As part of her foundation of honor and established order, Maat was tasked with helping to guide Ra’s path across the sky as the sun every day. She designed the course Ra was to take so that he would not run into any trouble and so he could end every day safe and sound.

In some versions of Maat’s mythos, she is not the daughter of Ra but is instead recognized as his wife. 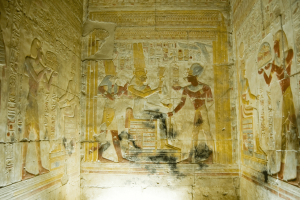 Many of Maat’s Old Kingdom myths state that Maat was married to Thoth, recognized as the god of wisdom, magic, and the moon. Egyptian myths were known to pair female and male gods together, particularly in regards to their complementary attributes. Thoth and Maat were considered very similar, therefore in the Egyptian mind, they were a match.

In the cult of Khmunu, it was the eight children of Maat and Thoth that were responsible for the world’s creation and the creation of everything therein.

– Maat, judge of the dead

After an Egyptian died, it was believed that their soul immediately went to the underworld to the Hall of Maat, where their judgment would be rendered through a ceremony called the Judgment of Osiris. It was here that Maat would render her verdict upon the righteous and unrighteous in order to maintain order and prevent the continuance of chaos.

To help a soul prepare for the Judgment of Osiris, collections of funerary spells from a text called The Book of the Dead, were designed to help a person through the process of moving through the underworld, past Maat’s judgment, and to the afterlife to meet Osiris in paradise. If a person did not have access and knowledge of these spells, it was believed that a person would not know what to do and would not be able to pass the tests and pitfalls of the underworld. Some of the most important sections of The Book of the Dead were sections on the Negative Confessions and the Forty-Two Confessions of Maat. These spells were the confessions of the tomb owner for the good or ill that he or she believed they committed throughout their life in accordance with the Laws of Maat. If a person felt as if they violated any of the Confessions of Maat, then those events must be recorded so they could be forgiven.

If the tomb owner believed that there were things that they should be given honor for doing that helped create order and harmony, then it was important to keep a record of this as well.

When a soul came before Maat for judgment, Maat would balance the heart of the person upon the Scale of Maat against Maat’s feather. If the heart weighed less than the feather, or balanced the scale, then the dearly departed was free to traverse the underworld to eventually meet Osiris in the afterlife. However, if the heart was heavy, burdened with violations of the principles of Maat or the spirit of her confessions, then the deceased was immediately torn to shreds and feasted on by vicious denizens of the underworld such as Babi or Ammit.

– Maat as the concept of justice

Maat was more than a simple goddess to the ancient Egyptians. Maat was a legal and philosophical concept that represented the consciousness of the Egyptian empire.

Maat was equated with law and order. In the Old Kingdom and through the New, the highest ranking official to the pharaoh was given the title Priest of Maat. Chief judges were said to embody the Spirit of Maat and were also given the title of lower Priests of Maat. Being a Priest of Maat was not just a governmental function but was a spiritual one, designed to maintain peace and harmony in the physical and supernatural planes.

Priests of Maat held court wearing a representation of the feather of Maat. They would also wear small golden idols of Maat as a sign of their authority. The feather of Maat was also drawn on the priests’ tongues with green dye to symbolize the fact that the words they spoke were emblematic of order and truth.

Verdicts rendered could be monetary fines, punishments, and occasionally executions. Crimes against Maat could be anything that was considered disharmonious in the world of the ancient Egyptian – injustice, lying, covetousness, gluttony, idleness, ungratefulness, and physical crimes such as theft or murder.

If a negative judgment was delivered by a Priest of Maat, then the accused would be found in violation of the Spirit of Maat and would face physical judgment and spiritual judgment in the afterlife.

– The Principles of Maat

In ancient Egypt, the Principles of Maat were the guiding values of culture. The Laws of Ma’at demonstrated how a person was to find union with the gods and the ideals of the universe, and were taught to Egyptians from birth to death, and even through the afterlife. The Principles of Maat were part of a person’s life training, as the principles were to the benefit of not just an individual’s development, but for that of the empire. Maat’s principles were designed to not just show on the outside but were to be embodied internally.

Maat as a goddess was an encapsulation of the seven Principles of Maat – Justice, Propriety, Harmony, Reciprocity, Truth, Balance, and Order. All corners of Egyptian society, from pharaohs to slaves, were expected to embody Maat’s principles, and the Laws of Maat were to guide every interaction and relationship.

Each Principle of Maat held its own meaning and understanding, and it was imperative that an Egyptian led their lives in accordance with them.

In the ancient system of Egyptian magic, to the priests and adepts who honored the gods and steered their culture, it was Maat and Anubis who held the key to their understanding of working with the powers of the universe.

As the symbol for truth and balance, the goddess Maat represented sacred female energy that rose up from the primordial chaos providing order and stability. As the daughter of Ra, the god of the sun, Maat helped plot his course across the sky that brought the sun’s life and energy to the earth. Anubis was associated with the moon and represented male divine energy, helping to divide the darkness from the light. He was seen as connecting the Earth with the sun and was named The Guardian of the Veil.

In honoring the two together, priests sought their blessing when attempting to enter the spiritual realms through their religious rituals. And in many religious representations, while Maat wielded the scales to weigh the hearts of the dead, it was Anubis who was often pictured adjusting Maat’s scales when measuring the heart.

In ancient Egypt, Maat was more than just a goddess who controlled the entrance to the underworld. Maat was emblematic and symbolic of the Egyptian way of life. Maat stood for order over chaos, truth over falsity, and harmony over disunity.

In the mind of ancient Egypt, Maat was the guidepost, the light in which all things were balanced against. More than just a winged goddess, Maat was an ideal, a concept, a way of living in harmony with the universe. Maat was a way of life for the citizens of one of the most powerful and long-lasting empires the world has ever, and will ever, know.