Ceridwen (sometimes spelled as Cerridwen) was a Welsh goddess, but she was more like a white witch, so she used her power for good, for the most part. 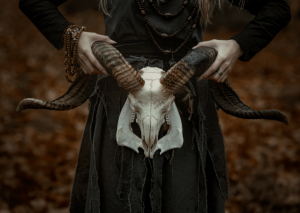 She was gifted with Awen, which was the power of inspiration, knowledge, and prophecy. With her cauldron, she could make special potions that could give others wisdom, prophecy, and beauty.

Read on to find out how she attempted to use a potion to help her ugly son but instead helped someone else.

Who Is the Goddess Ceridwen in Celtic Mythology?

There is some debate about Ceridwen’s name, but it most likely means a fair, blessed, or even crooked woman. She was a goddess in Celtic mythology, but she might have been turned into a Celtic sorceress after Christianity’s onset.

That was a far easier thing to swallow than someone with a status akin to the Christian god. In Celtic mythology, she was known as one of the most powerful witch goddesses with the power of Awen.

Her powers included the ability to give others the power that she had. She could shapeshift into whatever she liked. She could inspire others with gifts as well as give them wisdom and beauty. The potions she made could do that, and she often used them to help others.

However, her gifts were very dangerous. One can only take a little bit of her potions to gain the gifts. If they take more, they can die from how powerful the potions are.

Ceridwen was careful of this power, but she often used her gifts to help those around her, especially her son, Morfran. But in her main myth, Ceridwen didn’t take care to make sure her powers went to the right person.

Ceridwen and Her Family

In mythology, Ceridwen was married to Tegid Foel. His name meant “Tacitus the Bald,” and he lived at Bala Lake. Together they had two children: one was a girl, the other a boy. The girl was beautiful, and her name was Creirwy, but the boy was hideous, and his name was Morfran.

All of his skin looked like it was burned, and he was not very bright. Therefore, Ceridwen was hopeful that she could use her gifts to help her son be more beautiful and wise. She wasn’t quite successful, but her son did make his mark in later myths about King Arthur.

Ceridwen’s Myth: The Bid to Help Her Son

Ceridwen was mainly known for her attempt to help her son become more beautiful and wise. Her story can be found in the anthology of Welsh tales, the Mabinogi. Their story is under the section called the Book of Taliesin. Even though it’s only one myth that Ceridwen takes her role, it’s one of the most important myths in Celtic mythology.

Both Ceridwen and her husband worried about Morfran. He was both unattractive and lacking in intelligence, but they hoped for more for him in his life.

Ceridwen hoped she could create a potion that could give wisdom and beauty as she had done for so many others. She began her usual preparations, and she brought two people to help her in this endeavor. One of them was a blind man named Morda, and his job was to keep the fire going as her potion “cooked.” The other was a boy named Gwion, and he was the one who would stir the pot.

Unfortunately, even though Ceridwen had such amazing powers, each of her potions took one year to be completed. So Morda and Gwion slaved over the making of her potion, keeping it cooking for a year.

Just like she usually did, Ceridwen kept an important secret from her helpers. She didn’t tell them that only three drops would grant the imbiber beauty and wisdom, and the rest was completely dangerous.

They didn’t know, and one day, Gwion felt three drops spring out from the cauldron and onto his thumb. He sucked on his thumb to soothe the burning pain, and he received the wisdom and beauty meant for Morfran.

When Ceridwen found out, she was furious, and she chased Gwion in her angry rage. Now that he was given the same power as she, he could do the same as her and change shape to hide from her.

It was a difficult chase, and Gwion shapeshifted from one animal into another, and he started with a hare. He began to run away, fast and away from the witch goddess. She changed into a greyhound and ran after the hare. Then Gwion changed into a fish to swim away, and Ceridwen shapeshifted into an otter, hungry for its next meal.

After that, Gwion jumped from the waters and transformed into a bird. In response, Ceridwen changed into a hawk to chase after him and devour him. His last resort was to change into something a little bit less easy to find: a grain of wheat

However, because she was the goddess of wisdom, she found that grain of wheat and ate it, hoping that it would finally end Gwion.

He could finally receive the revenge that he so deserved. But Gwion being eaten didn’t kill him. He was now just as powerful as Ceridwen, and so instead, he made Ceridwen pregnant.

Ceridwen knew what had happened, and she made her plans to kill Gwion just as soon as he was born again.

Gwion’s spawn was born, and Ceridwen was ready to kill him, to finally wreak the vengeance she had so planned. But when she saw the child, she forgot that she had inadvertently given Gwion the gift of beauty. The child was so beautiful that she couldn’t bring herself to kill it. Instead, she decided to float the child out onto the ocean in a leather-skin bag.

He was eventually found on a Welsh shore by Prince Elffin ap Gwyddno. So Gwion’s heir was raised as a prince, and he became a very famous bard known as Taliesin. Cerridwen and Taliesin were forever linked in the myth, written underneath the book of his name.

This man became an advisor to many important figures in Britain. He was both druid and bard, and in some myths, he was very connected to the Arthurian figure of Merlin. Despite the lack of success to become wise and beautiful, his uncle, Morfran, became a famous warrior in King Arthur’s court.

Ceridwen and her powerful cauldron are not unknown images. Even though she is only mentioned in this myth, the story of a cauldron of power was seen in multiple other myths.

After Christianity started taking over, her story became linked to that of Arthur. Her cauldron’s powers became similar to those of the Holy Grail.

Ceridwen as a witch character was also not unlike Baby Yaga in Slavic mythology. Another similar story is that of Circe, the witch goddess in Greek mythology.

Ceridwen can be found in pop culture in various media: 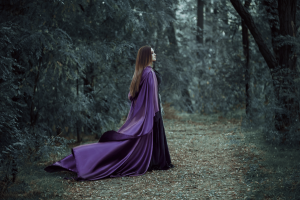 Ceridwen, despite her lack of many myths to her name, was a very powerful goddess. She was like a white witch, and she and her cauldrons were some of the most famous images in Celtic mythology.

Take a look at the list of main points that we covered in this article:

Ceridwen was a witch goddess whose powers became more like a sorceress after the onset of Christianity. She had the powers of inspiration, beauty, and prophecy, and her powers could help her gift others with the same gift. It was unfortunate that her son was in great need of her powers, and selflessly, she hoped to help his future by granting him such gifts.

Even though she accidentally gave her powers to another, she had the compassion to let him live, and for her compassion, her son made a place for himself in history.