Lugh: Tales of the Trickster God 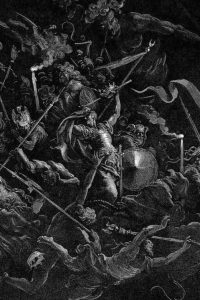 Who Is Lugh in Celtic Mythology?

Lugh is a god of many things, and his most famous name was Lugh of the Long Arm, given to him because of his powerful spear, the Spear of Assal, in battle. He was a good warrior and had an intelligent mind, which he often used for various tricks. He was known as a Celtic trickster god and a Celtic god of light, god of justice, kings, rulership, and god of mischief. He had many titles to his name.

His name was sometimes spelled Lug, and there is much debate about what his name means. It might have come from the root word “lewgh,” which means “to bind by oath.” This translation makes sense in some ways because he was connected to oaths. However, another meaning suggests that his name means “light.”

He was considered the god of light because of his mighty spear, which would turn into lightning when it was thrown. The spear of Lugh was unbeatable, but he had many other weapons in his varied arsenal. Lugh lived at Tara, the place of High Kings. He was famed for his skills, on and off the battlefield, and he even had a very famous warrior son.

The Origin of Lugh of the Long Arm

Lugh was a strange mixture of blood, for his grandfather was Dian Cedh, the healer of the Tuatha Dé Danann, the Celtic pantheon of gods. His father was named Cian, and his mother was Ethniu. Her father was King Balor of the Fomorians, who the Tuatha Dé Danann later fought in the battle to take control of Ireland. As a result, Lugh was kind of stuck between two worlds, but it would prove to be his destiny and get him the position he held as future king.

His parents might have been married in one story, but the other story is that King Balor heard that he would one day be slain by his grandson. So, he locked his daughter Ethniu in a tower on Tory Island so that she could never marry or give birth to a child. Cian used magic from a fairy named Biróg to get him to the tower, where he seduced Ethniu, and she became pregnant with triplets.

However, her father found out about her pregnancy. Once the children were born, he sent orders to a servant that they all be drowned. Two children died, but one slipped out of the servant’s hands, and the fairy woman rescued him. She returned Lugh to his father, who raised him on his own. But Lugh was also given to a few others to foster him as he grew up, but it’s not clear what happened to Ethniu after that.

Besides his parents, Lugh was fostered by various figures in mythology. Their names were Manannán mac Lir, the Irish sea god, Tailtiu, Queen of the Firbolg, and Gavida, god of the smiths. It depends on the myths you read. He grew up, he had many wives, and some of their names were Buach, Buí, and Nás.

With Nás, who was a daughter of a British king, he had a son named Ibic. He also had either a lover or a wife in a mortal named Deichtine. With this woman, he had his very famous and powerful warrior son named Cú Chulainn.

Lugh had many weapons in his arsenal:

The Epithets of the God of Many Talents

Accompanying his many talents, Lugh also had many titles to his name, all to honor his various skills and abilities. They are:

Lugh is likely one of the most well-known gods in Celtic mythology with all he did in his “lifetime” and all the powers he had in his skill set.

Joining the Group of Gods 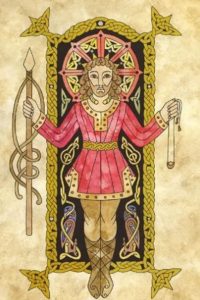 Once Lugh was grown up, he went to see King Nuada of the Silver Hand in the court of the Tuatha Dé Danann at Tara. This event was before the war between the gods and the Firbolg and the Fomorians, the original inhabitant groups on the Emerald Isle. So the rule of King Nuada’s court was that if you arrived to visit, you must offer the king something in return. Lugh named the skills that he could offer to the king in service.

But the king’s doorkeeper told him that everything he listed was already taken by someone else. So, with his cleverness, Lugh asked the man if the king had a “master of all skills” among his men, and the doorkeeper said he did not. Therefore, Lugh eventually joined King Nuada’s court as the master of all skills or Chief Ollam. Nuada knew about Lugh and his prophecy of killing his grandfather, so he invited Lugh to help plan his battle strategy.

The First Battle of Moytura

Before the gods could defeat the Fomorians and earn the Isle for themselves, they had to fight the fearsome Firbolg. Unfortunately for the gods, King Nuada lost his hand in battle, so he had to step down from his position as king. King Nuada had created the rule that a king must be whole to rule as king. In his place, he appointed High King Bres.

But like Lugh, Bres had a mixed heritage, and he was half-Firbolg and sympathetic to their cause. He enslaved the gods and put them in service to the Firbolg for 27 years. During this time, Lugh’s grandfather, the healer of the gods, finally made a silver hand (and later a flesh hand) for King Nuada so he could be whole again. Once he was, Nuada took the throne back from Bres.

Lugh continued to help King Nuada in creating a battle strategy to fight against the Fomorians now that the Firbolg were defeated. To do so, he sought the counsel of the Phantom Queen, one of the aspects of the triple goddess, the Morrigan.

Lugh and the Death of His Father

However, before the gods fought against the Fomorians, Lugh’s father, Cian, met his death, and he was killed by the sons of his rival, Tuireann. These three sons were named Brian, Iuchar, and Iucharba found Cian, who had used magic to transform into a pig. They attempted to kill them, and they almost did, but he turned back into his human form to do one more task before he died. He gave the right to his heir (Lugh) to avenge his death, and then he died.

The sons, triumphant in their success, attempted to bury Cian, but he kept coming back up. One day, in Lugh’s travels, he came upon this strange grave, and he asked the ground in confusion who was buried there. The ground told him that it was his father, and heartbroken, he decided he would take revenge on his father’s murderers. So he held a dinner, and he invited these sons to a feast, and they agreed.

At the feast, he asked the sons what they would need to feel justified if their father was killed, and they told him “death.” So he gave them a series of tasks to complete, which they did. However, at the final impossible task, their father pleaded for their lives. Lugh disagreed, and so they did the task, almost killing each of them. However, Lugh didn’t provide them any medicine or help, and so they died, and Tuireann died of grief as well.

Lugh and the Second Battle of Moytura

After the gods’ enslavement and their defeat of the Firbolg, the Fomorians and the gods met in County Sligo. Despite his heritage tied to the Fomorians, Lugh was on the gods’ side, and he fought bravely using his weapons. Unfortunately, many of the gods in the pantheon met their ends. King Nuada was one such god, and he was beheaded by King Balor of the Fomorians (who was also Lugh’s grandfather).

However, the prophecy stated that Lugh was to kill his grandfather. He used his slingshot to send a stone into Balor’s eye, and Balor fell, dead. This act was the death they needed to gain victory, but they had Morrigan’s help. The Morrigan, with their magical abilities, were able to help the gods push the Fomorians into the sea.

After the battle, Lugh was given the title of King of the Tuatha Dé Danann. He had proved his power and loyalty, and now that the Firbolg and the Fomorians were defeated, the gods could live peacefully and power on their new land. He also showed his mercy when the former king Bres came to him, begging for forgiveness for his betrayal. Lugh agreed, but he asked that Bres teach the gods how to plow the land, and Bres agreed.

There was a time of peace and prosperity on the Emerald Isle with Lugh at the helm. But once they got what they wanted from Bres, the Tuatha Dé Danann knew that they couldn’t leave the man alive. So Lugh had a clever plan in which he had three hundred wooden cows built filled with red and poisoned milk. He filled three pails with this poisoned milk and offered it to Bres, who drank it.

Bres did, and he died very quickly. Thus the Tuatha Dé Danann were avenged after the many years of enslavement and hardship that they had experienced.

The End of High King Lugh

Lugh ruled for forty years as king of the gods. He was well-loved, but after one of his wives, Buach took a lover named Cermait, he became furious with jealousy. He killed the man who was her lover, and thus he thought it was the end, but Cermait’s sons took him and drowned him in a lake to avenge their father.

The lake was then named Loch Lugborta. Lugh’s death meant that the end of the Tuatha Dé Danann was not far behind. As a spirit, he lived in Tír na nÓg, “The Land of the Young” in Irish/Celtic mythology. He would sometimes come to the mortal world, and one time he slept with a mortal, and she gave birth to the famous warrior and hero of Ulster, Cú Chulainn.

He even came to Cú Chulainn’s aid at one point when the warrior was nearly dying of his wounds in battle. Lugh saved his son even though he was long dead.

There is a holy day for this trickster god, and it is on August 1, called Lughnasa. It was to mark the start of the harvest season. It also celebrates Lugh’s victory of the spirits that live in Tír na nÓg. This holiday is also called “Garland Sunday” or “Mountain Sunday,” and people in Ireland might celebrate by climbing a hill or a mountain.

County Louth and Louth village are named this because of the god Lugh. There is also the lake that bears his name because that is where he was drowned. And he was said to have lived in two places: Tara and Moytura.

As such a powerful and memorable god, he still lingers with us today in various media:

Lugh was a strong and beloved god in Irish mythology, and his name still lives on in Ireland. Take a look at the list of main points covered in this article: 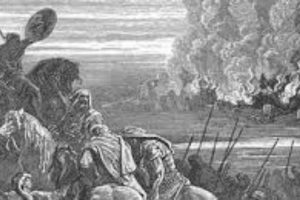 Despite his reputation as a trickster god, Lugh turned out to be loyal and good to the cause of the gods. He had family in his enemy, but he still fought for what he believed to be just. He was given the gift of the throne of the gods and ruled over them for many years peacefully. It’s indeed unfortunate that a mighty and respected god’s story had to end in a dishonorable murder, but that is like rulers today: starting in power, ending in shame.