Athena: The Greek Goddess of Beautiful Inspiration and Warfare 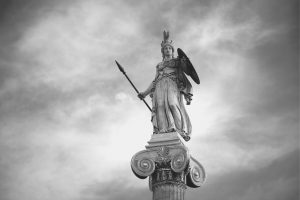 Who Is Athena in Greek Mythology?

Athena is the goddess of inspiration, logic, wisdom and warfare in Greek mythology. She is the embodiment of logical thought and cold calculation. She was brilliant, strategic, and a planner. Even though she was a woman, she was revered by men in Ancient Greece as a leader in warfare.

She was worshipped throughout Greece, but her main cult resided in Athens, hence the name. It was her place because that was the intellectual center of the Ancient Greeks. They built many buildings in her name: most famously, the Parthenon. Because of her existence, it showed the value of intelligence, strategy, and wisdom in Greek culture.

Athena, as a daughter of Zeus, had a unique beginning. She burst out of his forehead, and that makes sense for what she came to represent. It was a rough beginning, but she eventually became Zeus’ favorite child. She took part in many myths, and she had a role in many important aspects of Greek culture and history.

Etymology of the Goddess Athena: What’s in a Name?

There is some confusion and debate about the origin of the name Athena. Plato offered the idea that Homer’s thoughts on the name might have been correct. The latter, in fact, suggested that Athena came from the combination “mind” or “noũs” and “intelligence” or “diánoia.” But that was later decided not to be the case.

Most believe that her name comes from “Athênai” which is the Greek name for Athens. Deities were usually named for the places for which they were known. She went by many epithets which described characteristics of Athena. These epithets included:

What Is Athena Known For?

– What Is Athena’s Symbol?

Athena is most often portrayed as wearing a whole suit of armor and carrying a sword. Her other symbols are owls, snakes and olive trees, as well as helmets.

– The Unique Origin of Athena: How Was Athena Born?

But in this case, Athena and her mother were not to be silenced. They made such noise and clamor inside of Zeus’ head that he begged for relief. He called for Hephaestus to bring an ax and split his head open. Athena stepped out of her father fully grown and dressed in armor, ready for her life ahead.

The story of Hephaestus assisting his father is a very popular one. Indeed, this aspect of the story is the one that is often shown in art. Zeus and Athena had sort of a rough and painful start. But she eventually became his favorite child and something akin to a sage for the king of gods.

Athena was the only child of Zeus and Metis. She was very much loved by her father. She had no full siblings, but she had many half-siblings. Many of her siblings included famed deities such as Hermes, Persephone, Ares, Artemis and Apollo.

You may inquire about Athena’s husband, but she had no lovers or husbands. She is sometimes seen as sort of “immune to romantic love.” Her focus isn’t on love or romantic relationships. Therefore, she also didn’t have any children. But in some stories, she did adopt the early leader of Athens, named Erichthonius.

Mythology of Athena, Goddess of Wisdom and Inspiration

Athena had a role in many myths, and the story of Athena is mostly tales of political or religious import. She was called upon for blessings to inspire, bestow wisdom, and assist with military strategy. She lived on throughout Ancient Greek culture to the Ancient Romans as well. In the Roman world, she became Minerva.

– The Goddess of Wisdom and the Patronage of Athens

There are a few stories that explain how the great city of Athens became patronized by Athena. One of them states that Athena and her uncle Poseidon fought against each other to be the patron. They both decided they would give a gift to the city, and the king named Cecrops would be the one to choose the best gift. Poseidon put his trident in the ground unleashing a wave of saltwater.

In another story, he gave Athens horses. Athena offered an olive tree as a gift, and Cecrops accepted the gift happily. Athena was given the position as patron of the city, and Greece became so linked with olives. Olives became an integral part of the culture.

It also became one of Greece’s main exports. Athena became the city’s patron, and we don’t know if she got her name from the city or if the city got its name from her.

– Athena and Hephaestus: The Accidental Birth of a Son 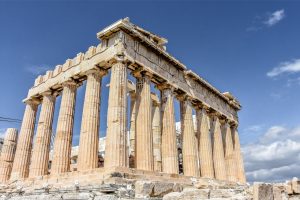 The goddess indeed had no lovers or children, but Athena’s brother, Hephaestus, attempted to rape her in one of the myths. Just in time, she pulled away from him, and he ejaculated on her thigh. She wiped it off and threw the cloth onto the ground. This act impregnated Gaia, the mother goddess, and she bore Erichthonius.

He became one of the leaders of Athens, and Athena chose him as her adoptive son. But in a different story, Hephaestus was able to get Zeus’ consent to marry Athena. He thought that because he had helped to get Athena out of Zeus’ head, she owed him something. They were married, and while in the marriage bed, Athena squirmed out of the way.

Hephaestus ejaculated onto the ground, and this also impregnated the mother goddess. If they did get married, then the relationship would have broken later because Hephaestus married Aphrodite. Athena remained a virgin goddess throughout her life.

– The Future of Erichthonius, the Adoptive Son of Athena

After he was born, Erichthonius’ tales moved in a few directions. One direction was that Athena put the baby into a chest and sent him away to stay with the three daughters of King Cecrops. She told the daughters not to open the box, but they eventually did out of curiosity. Inside, all they found was a coiled-up snake.

In another version of the story, the child was there but just guarded by a snake. Or, the child’s legs were snakes. After they saw what was in the box, they threw themselves to their deaths, all three sisters. In art, sometimes Athena is shown with a snake. In addition, the snake became the protector of the great intellectual city.

– Athena, the Goddess of Strategy and Patron of Heroes

Athena was the patron of famed Greek heroes, and she often showed herself in various stories. She would come at just the right moment and give her advice.

In one story, Athena gave advice to Argos on how to build the famous ship “Argo.” This was the ship that would take Jason and the Argonauts across the sea on their search for the Golden Fleece.

In another tale, Athena was the one who helped Perseus in his efforts to kill the dangerous Medusa. She was the monster who would turn you to stone if you looked at her, so Athena gave Perseus a reflective shield. He could look into it and see her instead of looking straight at her, and thus he was able to kill her.

Finally, Athena and Hercules were also linked because she helped him in one of his Twelve Labors. He was sent to steal apples from Hera’s garden, and Atlas’ daughters guarded it. He told Atlas he would hold up the sky for him while he asked the daughters to gather the apples.

But the sky grew too heavy, and Athena rushed in to help hold the sky for him.

– Athena Joins a Competition: Who is the Fairest of Them All?

Athena appeared in Homer’s, the “Iliad,” as part of a competition between three goddesses. Hera, Aphrodite and Athena each wanted to know who was the most beautiful of the three. The reason was that they wanted to own a golden apple inscribed with the phrase, “to the fairest” on it. Zeus commissioned Paris, Prince of Troy, to choose between the goddesses, but he couldn’t decide.

So, the three goddesses decided to bribe him to make him choose. Hera offered him political power; Athena offered him the glories of victory in battle; and Aphrodite told him that he could marry the most beautiful woman in the world. Paris chose the third option, and Aphrodite brought about the abduction of Helen from Sparta. This action triggered the Trojan War.

– The Military Goddess Playing Interference During the Trojan War

Athena used her powers to try and sway people to a certain side, advise them, or even change the tide of battles during the Trojan War. She was the one who backed the Greeks against Troy, and her interference would usually come in the form of whispering advice in the ears of men.

In one example, she helped to calm Achilles’ rage at King Agamemnon, thus preventing a particular battle from happening. She promised him rewards if he didn’t fight against him.

But that didn’t mean she didn’t like the fighting. Later in the story, both sides decided that the battle could be finally decided if King Menelaus and Prince Paris would fight together. Then, it could all be settled. But Athena wanted to continue the main battles.

There was a sort of truce between the two armies while they decided this, and Athena dressed herself up as a warrior named Laodocus. She told a Trojan general named Pandaros to fire an arrow at Menelaus because she told him that if the King of Sparta were to die, all would be sorted. He did, and she directed the arrow, making it only injure Menelaus instead of killing him. This broke the truce, and the fighting began anew, just what Athena wanted.

– Athena in the “Odyssey,” Giving Advice and Doing Tricks

In Homer’s “Odyssey,” Athena gave wisdom to the great Odysseus as he began his journey home back to his wife. She also provided counsel to his son Telemachus. But strangely, she also seemed to enjoy tricking him. In one story, she appeared to Odysseus in person dressed as a shepherd.

When he was back in his home in Ithaca, she came to him, and she told him that his wife Penelope had decided to find a new lover. Odysseus was furious, but he didn’t quite believe the shepherd because he believed in his wife. Athena saw that she was unable to trick him, and thus she revealed her true form to him. She told him the truth, that his wife was overcome with suitors for her hand now that her husband was gone for so long.

She also told him that his wife waited for him. Odysseus rushed home dressed as a beggar according to Athena’s suggestion. Armed with the knowledge about the suitors, he was able to kill every last one of them and return to his former life.

How Was Athena Worshipped?

Athena is the embodiment of reason, logic, mental strength, and military strategy. For that reason, you might find her statue outside of government buildings or on seals, etc. She also appears in: 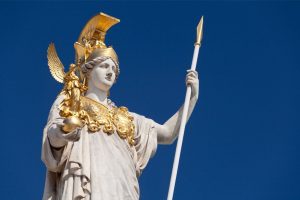 Take a look at the main points about Athena covered in the article above:

Athena is one of the most revered and valued goddesses in Ancient Greek culture. It’s important to mention just how important she was in all areas of wisdom, intelligence, and military strategy. She even eclipsed a man — Ares, the god of war — in terms of popularity among the Greek people. She had no lovers, no marriage, no children, and yet she made a name for herself: This is something we need to remember even today.