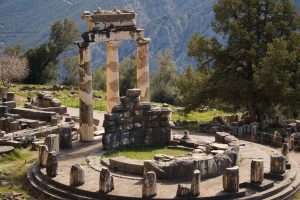 Phoebe titan goddess of the moon, is one of the 12 first-generation Titans. Not much is known about her, and she didn’t play an active role in many myths. However, the stories of her children and grandchildren are some of the most important in Greek mythology.

Who Is Phoebe in Greek Mythology?

Phoebe was a goddess of the moon, one of many. Unlike the others, Phoebe was more likely a personification of the moon itself rather than its ruler. Her granddaughter, Artemis, was the Olympian goddess who inherited Phoebe’s lunar title.

She was also the elder goddess of the intellect, but she is best known for her mental prowess as the Oracle of Delphi. She was the third to wear that title, after her mother Gaia and her sister Themis. In time, she too relinquished her oracular powers and gave the temple at Delphi to her grandson, Apollo.

The name Phoebe is derived from the Greek word phoibos, meaning bright or shining. Phoebe’s grandson also used the name and was often called Phoebus Apollo or Shining Apollo. Interestingly, this quality seemed to refer to their intellect rather than the types of light they represented.

Though there are few artistic representations, Phoebe was understood to be a young woman of exceptional beauty and intelligence. Her calm presence was comforting to those who came to the Oracle for guidance. In his Theogony, Hesiod describes Phoebe as “gold crowned.” This could be an actual crown, or it might be the rays of her shining presence.

– The Greek Myth of Creation and the Unloved Giants

Though we know little about the story of Phoebe specifically, her family’s history is also the history of the world. Often in creation myths, many of the characters disappear soon after they are mentioned. However, the tale of the Titans lasts much longer and continues in minor ways throughout the Olympian era of myth.

Before creation began, there was only a vast sea of nothingness called Chaos. Out of Chaos rose the Protogenoi, the primordial deities, such as Erebus (Darkness), Nyx (Night), and Gaea (Earth). From her body, Gaea brought forth Uranus (Sky) and took him as her consort.

Uranus and Gaea were the parents of three races of giants. The Cyclopes were master artisans, but they had only one eye. The Hecatonchires, with fifty heads and one hundred hands each, used their unusual traits to become mighty fighters.

Uranus was not pleased with these first two races. Sources differ about the reason; either he was offended by their ugliness or intimidated by their immense size. Perhaps both were true. Either way, he imprisoned his children deep in the earth, effectively thrusting his children back inside Gaia’s womb.

– The Birth of the Original Titans 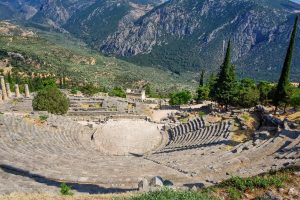 Luckily, the third race of giants was smaller and more beautiful, so they escaped the same fate as the Cyclopes and the Hecatonchires. Gaia gave birth to the original 12 giants known as the Titans. According to some sources, the children were actually six sets of twins.

Coeus and Phoebe became consorts, and their union brought forth two daughters: Leto and Asteria. They played a role in a significant Olympian myth, which is recounted later in this article. Hesiod’s second mention of Phoebe contains the description of her children:

Again, Phoebe came to the desired embrace of Coeus.

Then the goddess, through the love of the god

Conceived and brought forth dark-gowned Leto,

Always mild, kind to men and to the deathless gods,

Mild from the beginning, gentlest in all Olympus.

Whom Perses once led to his great house

To be called his dear wife.

– The Overthrow of Uranus and the Rise of the Golden Age

Uranus was a tyrant who ruled with an extremely heavy hand. Gaia was greatly pained – physically and emotionally – by the imprisonment of her children. She asked the Titans to overthrow Uranus. Phoebe and the others all agreed that it must be done, but only Cronus was willing to attack his father with a weapon.

Coeus, Crius, Iapetus, and Hyperion, who served as the Four Pillars of Heaven, volunteered to assist Cronus. When Uranus came down from the sky to lie with Gaea, they ambushed him and pinned each of his limbs at the corners of the earth. Gaea gave Cronus an adamantine sickle, and Cronus castrated his father, tossing his testicles into the sea. Humiliated, Uranus fled back into the cosmos.

After Uranus fled, some sources report that the 12 Titans met and divided the world between themselves, which is how they received their attributes. However, the four brothers that assisted Cronus were already acting as the Four Pillars of Heaven at the time. With Cronus at their head, they ruled over an era of peace and prosperity called the Golden Age. Their seat of power was Mount Othrys.

– The Overthrow of Cronus and the Fall of the Golden Age

Eventually, the Golden Age began to fail. Cronus became obsessed with a prophecy that said Cronus’s children would betray him like he betrayed Uranus. In his madness, he swallowed his first five children as soon as they were born. Rhea saved her sixth child, Zeus, by tricking Cronus into swallowing a stone instead.

When Zeus was grown, he returned and disguised himself as Cronus’s cupbearer. He slipped mustard into Cronus’s wine, which caused Cronus to vomit up Zeus’s siblings, full-grown. The six siblings went to Mount Olympus to plan their strategy.

While most of the Titans sided with Cronus, a few fought with Zeus and the new Olympians. Phoebe and most of the female Titans took no active part in the war, and they sheltered at the home of Oceanus and Tethys while the battle raged.

After ten long years, the Olympians were triumphant. Those male Titans who sided with Cronus were condemned to suffer in the abyss of Tartarus. The female Titans were spared since they took no part in the battle. After this point, not much is written about Phoebe except to recount the tales of her famous children and grandchildren.

Phoebe’s Children and the Birth of Apollo and Artemis

Leto and Asteria, Phoebe’s daughters, took after their mother in that they were quite beautiful. Sadly, their beauty guaranteed that Zeus would lust after them and pursue them. How many Greek myths involve Zeus chasing after a woman for sex? In modern times, such stories would end much differently.

To escape Zeus, Asteria turned into a quail and threw herself into the sea. From there, she became the floating island of Ortygia, possibly to escape the further advances of Poseidon as well. Regardless of the reason, her last transformation allowed her to help her sister when she needed it most.

Leto was not successful in avoiding Zeus, and she became pregnant. Hera, who could not revenge herself on her husband, instead punished the women who received his affections, willingly or not. Enraged, Hera decreed that Leto could not give birth anywhere on terra firma.

Since Ortygia was a floating island and not connected to the seafloor below, Asteria could provide refuge for her sister. For nine days, Leto remained in labor, and at last, she gave birth to Artemis. Once born, Artemis served as her mother’s midwife, and a day later, Apollo graced the world with his shining presence.

The Passionate Love Story of Zeus and Phoebe

There is a heartwarming story about the love affair between Zeus and Phoebe. However, it isn’t about the Olympian sky god and the Titaness of the moon. Instead, it is about two ginger cats who became internet sensations. Though Zeus passed away a few years ago, their legend lives on. More information can be found on popular social media sites.

Like most of the Titans, Phoebe once played a prominent role in Greek mythology, but her prominence faded with the rise of the Olympian gods. Here are a few things we do know about her.

Despite her diminished role, Phoebe’s influence still lived on in the stories of her famous grandchildren.