Cronus: Carnivore King of the Titans 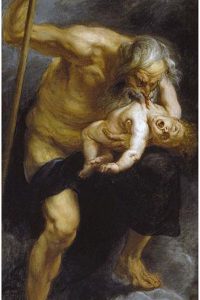 In modern culture, Cronus, Titan of time is recognized through artistic renderings of the old man dining on his children. However, the story of Cronus is more detailed and contains a healthy measure of bounty and prosperous rule. Still, his gastric genocide was the pivotal event that began the rise of the Olympian gods.

Who Is Cronus in Greek Mythology?

Cronus was only 1 of the first 12 Titans that were personifications of time. In his case, he personified time as a relentless, destructive force. The passage of time eventually devours all things.

Not all of Cronus’ powers were considered destructive, however. He was also considered the god of grain and bountiful crops. After all, a good harvest also depends on time. In Athens, they celebrated his generosity during a harvest festival called Kronia. It honored the god for providing a bountiful harvest throughout the growing season. In his Roman persona of Saturn, he was revered during the winter planting festival of Saturnalia, which was the forerunner of Christmas.

Cronus is often pictured as a bearded man, vigorous but old, carrying the sickle with which he castrated his father. In his capacity as ruler of the harvest, he carried a sheaf of grain and a scythe. His animal symbol was a snake.

Sources differ on whether or not Cronus was a different god than Chronos, the old Father Time that relinquishes his rule to the baby New Year at the change of the calendar. Given their almost identical attributes, it would be easy to infer that the two are identical. Indeed, the Baby New Year has sometimes been conflated with Zeus. This Cronus/Chronos image has lent its name to instruments that measure time, such as the chronometer and the chronograph. The word for an old woman, crone, also derives from the same root.

Cronus, King of the Universe in the Golden Age

Though the myth of Cronus is relatively short, it is the vital foundation for all of Greek mythology. Without his contribution, the heroic tales of the Olympian gods wouldn’t exist.

At the beginning of the world, there existed only the amorphous being Chaos. Chaos created a handful of primordial gods, such as Nyx (Night), Erebus (Darkness), and Gaia (Earth). Gaia gave birth to Uranus (Sky) and then mated with him. Their union created the original 12 giants known as the Titans: 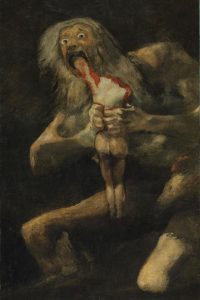 Some sources say they were six sets of twins, one set being Cronus and Rhea. Uranus and Gaia were also the parents of other races who were also giants: the Cyclopes, the giants with one eye, and the hundred-handed Hecatonchires.

Uranus’ rule was that of a paranoid tyrant. He imprisoned Cronus’ siblings, the Cyclopes and the Hecatonchires, in the abyss of Tartarus. Perhaps he was offended by the ugliness of those two races. Still, more likely, he was intimidated by their size and strength, fearing they could overthrow him. The Titans likely escaped this fate because Uranus considered them less of a threat. This error in judgment proved to be his downfall.

Gaia was upset at the treatment of her children, and their imprisonment in Tartarus caused her physical pain. She gathered the Titans and convinced Titans to rise up against their father, but only Cronus was willing to wield a weapon against him. Gaia gave Cronus an adamantine sickle with which to do the deed.

The Titan brothers that served as the Four Pillars of Heaven were Coeus, Crius, Iapetus, and Hyperion. They stood at the four corners of the earth, holding the sky aloft. Considering that Uranus and Gaea were the personifications of Earth and sky, keeping their parents apart seems an odd responsibility. However, they were in the perfect position to help Cronus with the coup.

When Uranus descended to mate with Gaia, the four brothers ambushed him and pinned each of his limbs at the corners of the earth. Cronus took the adamantine sickle and castrated his father, flinging his testicles into the sea. The blood that splattered onto the oceans created other creatures such as the Furies, the Erinyes, and the Meliae. His genitals caused the sea to foam, and from that foam, the goddess Aphrodite was born.

Uranus fled back into the cosmos, and Cronus assumed the throne on Mount Othrys. He and his sister/wife Rhea presided over what was known as the Golden Age, one of the five fabled ages of man. Sources record that the Golden Age was one of harmony between all living beings, where everyone operated within the natural order without the need for laws or governance. Humans lived peaceably, toiled little, and lived long.

The Titanomachy and the Downfall of Cronus

Unfortunately, the story doesn’t retain its idyllic nature. There existed a prophecy foretelling that the children of Cronus would rise up against him. Over time, he became obsessed with the idea, and he dreaded sharing his father’s fate. In his madness, he hatched a scheme to eat his children as soon as they were born.

The wife of Cronus was understandably upset when she brought her firstborn child Hestia to meet her father, and Cronus swallowed her whole. However, the sight of Cronus eating his daughter did not stop Rhea from bearing him more children. She watched in horror as he consumed the following four children: Demeter, Hera, Hades, and Poseidon.

By then, Rhea had finally had enough. When it was time to bear her sixth child, she fled the Island of Crete and gave birth to Zeus in secret. Returning to Mount Othrys, she tricked her husband. Instead of Cronus eating his son, he consumed a stone in swaddling clothes. By that time, he was so obsessed with preserving his rule that he swallowed the stone without noticing the difference.

Zeus grew up in safety, hidden in a cave on Crete. When he was an adult, he returned to Mount Othrys and disguised himself as Cronus’ cupbearer. He slipped a concoction into Cronus’ wine which caused him to vomit up his children, fully grown. Zeus and his siblings encamped to Mount Olympus and prepared for war.

Thus began the great conflict between Zeus and Cronus called the Titanomachy, or War of the Titans. Most of the male Titans fought alongside Cronus. A few, such as Prometheus and Epimetheus, fought for the new Olympians. For the most part, the female Titans remained neutral. Many of them reportedly took refuge at the home of their brother Oceanus until the end of the war.

The fierce battle lasted for ten years. Each side seemed unbeatable, and the earth suffered greatly during the struggle. It wasn’t until Zeus released the Cyclopes and Hecatonchires that the Olympians gained an advantage. The Cyclopes fashioned powerful weapons for the gods, including Zeus’ lightning bolt. The Hecatonchires used their many hands to hurl boulders and mountains at the Titans. With this extra force, the Olympian gods were finally able to overcome Cronus and the other Titans.

After the defeat, Zeus took Cronus’ sickle and cut his father into a thousand pieces, throwing him into the abyss of Tartarus along with all of Cronus’ brothers who fought with him. Homer mentions that Cronus was still in Tartarus as late as the Trojan War. However, some sources record that Zeus eventually had mercy on the Titans and released them. He gave his father the dominion of the Elysian Fields, the place in the Underworld where heroes and righteous people spent eternity in comfort and bliss.

Regardless of whether he was condemned to Tartarus or started a new Golden Age in the Elysian Fields, the story of Cronus effectively ends after the Titanomachy. 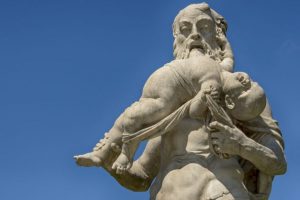 Cronus’ story is one of bountiful harvest and righteous rule, but he is recognized chiefly for his tyrannical violence and madness. Here’s a recap of what we have learned.

Like the rest of the first-generation Titans, the arc of Cronus’ story is relatively short. However, his existence is vital to the foundations of Greek Mythology, and he will be remembered in legend alongside his children.