Coeus: Titan and Pillar of the North 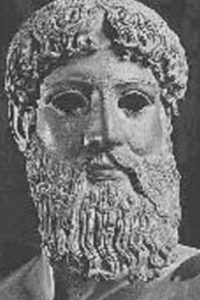 One of the more obscure characters in Greek Mythology is Coeus, Titan god of intellect. Little is known of him, other than his wife and children, parentage, and a minor role in the Titanomachy. Like many of his siblings, Coeus’ story serves as a setup for the more recognized myths in the age of Olympian gods.

Who Is Coeus in Greek Mythology?

In the ancient Greek language, koios means query or questioning. Coeus was associated with knowledge, wisdom, intellect, determination, and the inquisitive mind. In artistic representations, Coeus has long wavy hair and a similar beard. Furthermore, he sees the world through exceptionally round eyes. Since his place in myth is obscure, he has no associated weapons, animals, or plants. However, he does have an association with the planet Mercury.

Coeus was one of the original 12 Titans, one of the first races on the Earth. Along with three of his brothers, Coeus represented one of the Four Pillars of Heaven, separating the Earth and the Sky. After the great war against the Olympians, Coeus was imprisoned in the dark abyss called Tartarus, and his nephew, Atlas, took his place holding up the Sky.

As the northernmost pillar, Coeus was considered the god of the axis around which the constellations revolved. This association led to his Roman name, Polos, meaning “of the northern pole.” In Hellenistic times this axis point was indicated by the star Alpha Dra in the constellation Draco. This aspect of Coeus marked him as the heavenly counterpart of his wife Phoebe, who was known as the navel/axis of the Earth at Delphi. Both axes were believed to be guarded by a dragon.

Being associated with the stars in this way may have led to his association with heavenly oracles. Again, he served as the complement to his wife. While Phoebe interpreted the prophetic voice of her mother Earth (Gaea), Coeus could hear his father’s prophetic voice, the Sky (Uranus). As the possessor of earthly intelligence and prophetic insight, Coeus was likely viewed as the original font of all knowledge.

Coeus and Phoebe at the Dawn of Creation

Like the other first-generation Titans, the story of Coeus begins and ends before the formation of humankind. There is little specific mention of Coeus in the myths of Creation and the Titanomachy, but one can infer that he played an active role in both.

Before the world existed, there was only Chaos. Chaos brought forth a handful of primordial gods, such as Nyx (Night), Erebus (Darkness), and Gaia (Earth). Gaia gave birth to Uranus (Sky), who became her consort and father to her children. Their union created the original 12 giants known as the Titans: 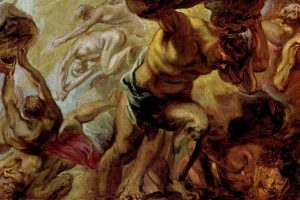 Uranus and Gaia were also the parents of other giant races: the one-eyed Cyclopes and the Hecatonchires with one hundred hands and fifty heads.

Along with his brothers, Iapetus, Hyperion, and Crius, Coeus was given the task of guarding one of the four enormous pillars that held up the sky, keeping it from crushing the Earth. Coeus had responsibility for the pillar in the north, near the axis of the constellations.

It seems strange that four of their sons were tasked with keeping the two separated since the Earth was their mother and the Sky was their father. However, this is only one of the numerous parts of myth that seems nonsensical to modern man.

Coeus married his sister Phoebe, whose attributes seemed to be the complement of his own. Together, Coeus and Phoebe had one son, Lelantos, and two daughters, Leto and Asteria. Their stories take place later in Greek mythology, after the rise of the Olympian gods.

The Titanomachy and the End of the Golden Age

When the Titans, Cyclopes, and Hecatonchires were born, Uranus was the supreme deity of the world. Uranus imprisoned the Cyclopes and the Hecatonchires in the yawning dungeon abyss called Tartarus. There is a mixed opinion about why he did this. Either he was intimidated by their superior size or offended by their ugliness. Since the Titans possessed neither of those attributes, they were spared the same fate. They were likely perceived as less of a threat to Uranus’s rule.

Gaia was saddened and offended that her children were imprisoned. Considering that Tartarus was located deep within the Earth, this also caused her great physical pain. She convinced her children, the Titans, to rise against Uranus and overthrow him. They all agreed, but only Cronos was willing to wield a weapon against their father.

Coeus, Iapetus, Hyperion, and Crius were able to assist their brother since they were positioned at the four corners of the Earth. When Uranus descended from the heavens to mate with Gaia, the four brothers ambushed him. They held him down by his arms and legs while Cronos castrated him with an adamantine sickle given to him by Gaia. He fled back into the cosmos, defeated.

Cronos assumed his father’s throne, and he ruled over the cosmos during the Golden Age. Fearing a prophecy that his children would overthrow him as well, he ate his first five children as soon as they were born. His wife, Rhea, smuggled the infant Zeus away, fooling her husband into swallowing a stone instead. When Zeus was grown, he came back and tricked Cronos into drinking wine laced with an emetic, possibly mustard. This trick caused Cronos to vomit up the five children, who emerged full-grown from their father’s stomach. They joined together to rise against Cronos.

Thus, the Titanomachy began. Most of the Titans fought alongside Cronos, and it can be assumed that Coeus also chose his brother’s side. Some prominent Titans, such as Prometheus and Epimetheus, fought alongside Zeus and the new Olympian gods. Most of the female Titans were considered neutral. No complete text details the battle, and none of the fragments mention Coeus’s involvement in the war. One can wonder, if Coeus possessed such wisdom and foresight, why did he support the losing side?

The conflict raged for 10 years, with neither side gaining the upper hand. Some sources suggest that the Olympian gods gained the advantage when Zeus released the Cyclopes and Hecatonchires from Tartarus. The Cyclopes fashioned powerful weapons for the gods, including Zeus’s lightning bolt. The Hecatonchires used their many hands to hurl boulders and mountains at the Titans. With this extra force, the Olympian gods were finally able to overcome the Titans.

After they won the war, Zeus condemned Coeus and the majority of the Titans to suffer forever in Tartarus. A later source records that Coeus was driven mad by the imprisonment, and all of his intellect disappeared behind a consuming bloodlust. He clawed at his adamantine shackles until he broke them. However, when he tried to escape and take his revenge on Zeus, he was thwarted by the three-headed dog, Cerberus.

Coeus’s Legacy as the Grandfather of Gods

After the Titanomachy, Coeus faded into obscurity. His remaining contribution to myth lies with his three children: Lelantos, Asteria, and Leto.

Lelantos’s name means something that remains unseen. Therefore, he became the Titan of the hunt and of stalking prey. His daughter was Aura, the huntress, goddess of the breeze.

Asteria was the Titan goddess of falling stars, astrology, and dream divination. She was the mother of the goddess Hecate. In her myth, Zeus pursued her out of lust. She then transformed herself into a quail and jumped into the sea. There she was transformed into the floating island of Delos, where her sister Leto’s twins were born.

Leto was a Titan goddess of modesty and decorum. After Zeus failed to lie with Asteria, he seduced Leto, and she became pregnant. When Hera heard, she became wildly jealous and forbade Leto any refuge on land on which to give birth. Her sister as the island of Delos gave her sanctuary, and there she gave birth to the twin gods Apollo and Artemis.

Like most of the Titans, the story of Coeus has mostly been forgotten. Still, he made significant contributions to Greek mythology through his own deeds and his children’s stories. Here’s a quick summary of what we learned.

Though the Olympian gods overshadowed the Titans and the primordial gods, Coeus and his siblings still ruled the cosmos in the Golden Age before the creation of man.